A degree won’t make you an actor if you don’t have the potential to be one. Neither will any other formal qualification. What you need, almost certainly, is systematic, detailed, intensive, individualised vocational training from people who know – really know – the industry first hand. And that doesn’t mean that they last worked on a West End show in 1996. Effective teachers have recent/current experience of a continually changing, shifting industry.

But the schools which hold their nerve and continue to offer such training have real problems, most of them financial.

Last week I had the privilege of seeing, and reviewing, London School of Musical Theatre’s Lend Me A Tenor at Bridewell Theatre. It was stonkingly good. Deeming it the best drama school show I have ever seen (and I’m no stranger to them) I gave it five stars and I’ve never done that before.http://musicaltheatrereview.com/london-school-of-musical-theatre-lend-me-a-tenor/

In the interval founder/principal Adrian Jeckells told me that it’s now harder to recruit the right students since career development loans have been axed. Students in independent, non-degree training establishments do not have access to student loans.  CDLs were the last bastion of funding for these students. Now it’s a question of getting private sponsorship, win a scholarship, pay the fees yourself up front or go and work in IT instead. TheMTA, Fourth Monkey and a number of other excellent training organisations have the same difficulty.

“But I’m determined not to lower standards in order to fill the course or to go down the degree route” Jeckells told me. And I admire him for that.

Over the last 20 years or so, since the introduction of tuition fees, most colleges have opted to convert their main courses to degrees. Some – like Rose Bruford and Trinity Laban – even now have their own degree awarding powers.  Schools such as GSA and East 15 have gone the whole hog  and merged with universities (Surrey and Essex respectively) at the cost, one observes, of a certain amount of autonomy.  Most are accredited by an outside university. Drama Studio London is one of the most recent with its new three year course accredited by De Montfort University Leicester.

“It’s all about money. Our students need access to student loans” Kit Thacker, DSL’s Managing Director told me the other day.

So where does that leave the independent providers, some of which are doing outstanding work and producing top notch industry ready performers every year, but who don’t – and won’t – offer degrees?

It narrows their recruitment pool. Just as everyone – government, Arts Council, the industry et al – trumpets inclusivity and says it doesn’t want performing arts to be staffed entirely by “rich kids” the powers-that-be cut off all means of support to anyone who wants to train via a non-degree course.

It’s ignorant, inequitable and immoral. Why can’t independent training providers, who can show that they deliver the goods, be registered as bona fide organisations whose students are entitled to student loans? There is no logical reason why student loans should be so rigidly tied to degrees. And in this industry, in particular, it makes no sense at all to insist that a degree is the be-all and end-all. 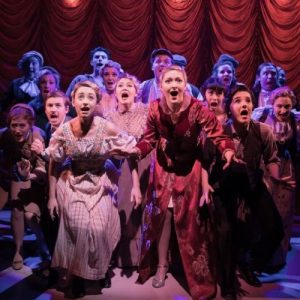