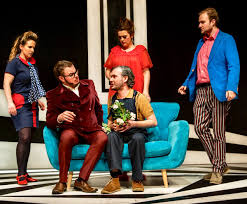 Billed as “opera meets jazz” this 1960s Figaro is rescored by Harry Sewer for kit drum, bass and keyboard led by Gabriel Chernick – a development which took many audience members, including me, by surprise although there was plenty of warm appreciation and laughter.

Interestingly, many of the arias are sung more or less straight against swing and other jazz rhythms which must be pretty challenging to do. The accompaniment plays around with harmonies too. It works quite well in some numbers – such as Cherubino’s  (Bethany Horak-Hallett) agitato Act 1 number, although there are some rocky starts to arias as singers awkwardly find their way into the melody without the usual cues.

Much less successful is, for example, Figaro’s (Alistair Ollorenshaw) angry patter aria in the final act which loses a lot of edge because it is softened and trivialised by the jazzy stuff from the band. And the Countess’s (Rhiannon Llewellyn) second big aria, usually sung as “Dove sono”, is dreadful in this version. It is one of Mozart’s very simple glorious melodies depicting a complex mindset and he knew that it needs only the gentlest of accompaniments. It is completely spoiled by the fuzzy treatment it gets here although Llewellyn, a fine singer, does her best to rise above the schmultz.

In amongst all this is some excellent singing especially in the quartets and other group numbers. The cast has great fun with the reconciliation septet at the end of the first half and the choral work in the finale is beautifully balanced.

Anna Sideris is a suitably sparky Susanna, there is a good Handyman cameo from Christopher Faulkner and Eleanor Sanderson-Nash is a delightfully clear voiced, fresh Barbarina.

Phil Wilcox is strong as the wrong footed Count too, especially at the end when he hams up all those rising fifths. They’re traditionally associated with forgiveness but we know full well that he doesn’t mean a word of it – and, in this version, the Countess knows that too.

Amanda Holden’s translation into English is hilarious and that’s partly why this piece comes off theatrically. There’s a lot of humour in the incongruity of the juxtaposition of the Enlightenment with the 1960s, musically and in every other way – and in many instances that is what makes the cognoscenti in the audience laugh. At another level it’s just cheerful and funny. Michelle Bradbury’s striking, and ingenious, black and white Chanel-style set adds to the ambience. So do black-clad, finger clicking figures – part of the 10-strong cast who form an ensemble between their other appearances – who dance with authentic 1960s loucheness.

I haven’t seen such an experimental Mozart opera since I saw Don Giovanni in a gay nightclub with all roles except Don Giovanni reversed. The material is, of course, so strong, that it bounces back fairly robustly whatever you do to it. This Figaro is a pleasant enough way of spending a Sunday afternoon but on balance I prefer my Mozart jazz-free.