This production has been around for 24 years since 1995 so – seeing it now for the first time – I’m a bit late to the lakeside, as it were. But good things keep and this show is very good indeed: spellbinding, in every sense. 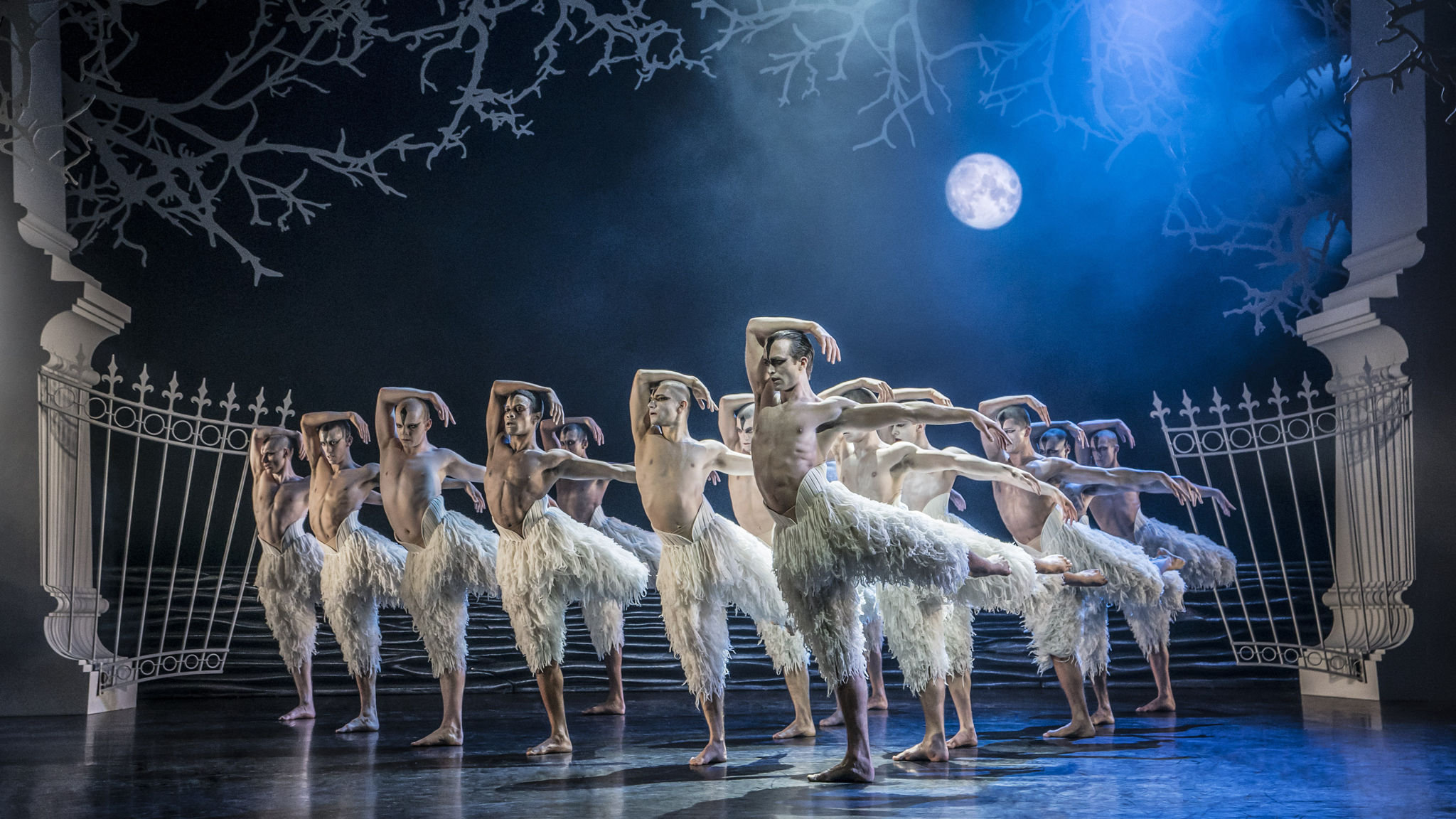 Bourne and his colleagues have reworked the story so that we’re in a very twitchy modern royal family complete with mechanical, floor clicking corgi (a lovely touch) and plenty of angst. The prince, who is gay but under pressure not to be, (James Lovell, Liam Mower or Dominic North) visits a lakeside in despair and sees swans who thereafter permeate and dance through his sometimes troubled, sometimes joyful dreams.

All the swans are men – muscular and very cygnine. They behave and move like animals and it’s deeply compelling to watch and listen to as they their bare feet slap rhythmically on the ground as if webbed and their unison hisses and growls punctuate the music with percussive accuracy. They are attractive but also wild, sinister and menacing with the lead swan (Will Bozier or Max Westwell) with whom the prince falls in love packing oodles of dark mystery. The Dance of the Little Swans is a playful delight with much infantile jostling and silliness.  And the split level ending – complete with that show stopper key change – presents the dichotomy perfectly.

The choreography, which is splendidly original, is the real star of this show. Every movement matches the music, from some amusing teeth cleaning and deodorant application at the beginning to a strange, passionate leap in which the prince more than once curls himself entirely round the hips of swan who holds and spins him foetus-like in defiance of gravity. This production is about as far from the world of tutus and en pointe as it could be with steps and ideas borrowed from many other dance genres including street and hip-hop seamlessly grafted into traditional ballet. Even the costumes are part of the choreography as the black and white elements move against each other, for example, in the livery of the servants at the beginning.

Matthew Bourne’s New Adventures company uses pre-recorded music and although I love to see an orchestra it works well here. The Swan Lake Orchestra recorded the score at Air Studios in 2004 with Brett Morris conducting and I like the way he, and the sound engineers, bring out all Tchaikovsky’s magnificent orchestral detail and colour which underpins every movement on stage, however tiny.

It is, in short, a masterpiece. I’m so glad it’s touring yet again giving more people, like me, the opportunity to see it for the first time and old hands the chance to revisit it in admiration.