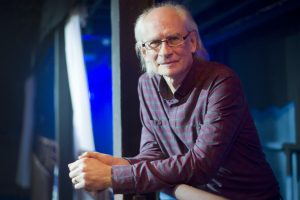 Chickenshed, whose slogan is “Theatre changing lives” is an inclusive theatre company in north London which also runs further and higher education courses. Since 2000 it has established 19 “sheds” in the UK and two in Russia to develop inclusive theatre elsewhere. Susan Elkin talks to Lou Stein who took over as director in April.

What did you do before you came to Chickenshed? I was born in Brooklyn, New York City. I’m not going to tell you when but I’m younger than Hilary Clinton. I trained at Northwestern University (Bachelor of Science Communications), University of Iowa (Master of Fine Arts in Theatre Directing) and with BBC Training (TV Director’s Course, 1992). I’ve been Freelance through my own company since 2000. I was Artistic Director at Watford Palace Theatre from 1986 to1995 and, before that, Founder/Director at The Gate Theatre from 1979 to 1985.

Many people associate Chickenshed with disability but that’s misleading isn’t it? Yes, I want to stress inclusion. Some Chickenshed participants have learning difficulties and/or visually obvious impairments but many don’t. It’s a reflection of society as it is.

How do you plan to develop that though theatre? Chickenshed is going to be a confident, highly skilled professional company, staging unmissable plays. And for that I have the support of the entire staff of 70 full timers. It might take a while, but that’s where Chickenshed is headed. It has to present theatrically entertaining shows which people will flock to see. It’s theatre we’re creating not documentary. So I shan’t be doing anything earnest. Of course, at the same time, I want work at Chickenshed to explore interesting or controversial issues in a way which makes people want to talk about them afterwards. And I shall collaborate and build partnerships so that we can transfer some of our work into central London, although if it’s good enough audiences will come to Southgate too.

You mean you’re going to improve standards? Yes. I want to raise the bar and to do so systematically. First I need to take the staff with me. Everyone needs to understand that we are staging professional theatre and it has got to be absolutely first class. Then the people on the Chickenshed degree course and our Btec students will follow and everything will spiral upwards.

When did you first come across Chickenshed? My son Ethan, who is 9, has Down’s syndrome. He has been a Chickenshed member for five years and it was as a parent that I first became fully aware of Chickenshed’s way of working. You see, I understand just what a person like Ethan is up against. So many doors are closed but at Chickenshed he has been welcomed, treated by staff, and crucially other students, with love and empathy and the growth we’ve (Lou’s wife is the composer. Deirdre Gribbin) seen in him as a result is remarkable. Because theatre is my life, I wanted something theatrical for him to do where he wouldn’t be marginalised.

How difficult was it to get the job, as you’re the first new director since the company was founded? Yes, until now Mary Ward who co-founded Chickenshed in 1974, has been the artistic director so this is a big change and major new phase for the company. Even now Mary remains on the board. Perhaps it’s because of this background that the interview and recruitment process for the job was the most rigorous I have ever been through.

So how important is that history? It may seem a bit controversial but I am not actually that interested in the history. Of course the work that Mary and her co-founder Jo (Collins) have done here is what has made Chickenshed what it is and that’s terrific and very important, but my concern now is to move forwards and reach new levels of excellence. And to do that I need to keep a very clear and objective eye.

Chickenshed is a complex organisation isn’t it? Yes, it’s effectively a further and higher education college as well as a theatre. Chickenshed is a busy place because it operates on so many levels, something which is not fully understood by people who think it’s a youth theatre, producing house, a dance school, “a place for disabled kids”, or a further and higher education provider. In fact, of course, it is all of those and more.

What about lobbying? Lobbying for inclusion is like lobbying for air. We’re not going to do it because it’s just a fact of life.

What are you working on at the moment? It’s a new Oz story which I’m writing for Chickenshed’s Christmas show. There will be a group of associate directors whom I shall oversee and they’ll work with a cast of 800 in four cast groups.

And your longer term future? I am a person of possibilities. And I shall keep my own company Lou Stein Associates Ltd on the boil creating new work and new opportunities alongside Chickenshed.