Last week I called in on the National Theatre’s Creative Careers day – of which more in The Stage very soon. Suffice it to say here for the moment that it was most encouraging to see well over a hundred 11-14 year olds from London state secondary schools so engaged in learning about what makes theatre work behind the scenes.

While I was there I also had a good chat with two former apprentices in their twenties and they had a lot to say about training for backstage careers. I shan’t name them now because I plan to use much of what they said in a later article elsewhere.

One – now a very busy, well paid freelance scenic carpenter – had done a scenic carpentry apprenticeship at the National Theatre. Why didn’t she train on a technical theatre course at a drama school, I asked her, and it was like opening floodgates.

She pointed out that most of these courses are only two years for a foundation degree. Typically the first year is a series of short modules so that every student gets a taste, and that’s all it is, of every aspect of technical theatre. That leaves just a single year (nine months, in practice, given the usual academic calendar) to specialise. Three years learning on the job as an apprentice and being assessed on real, live projects must be better, she concluded. And she was quick to point out that two years in drama school leaves you about £40,000 in debt given tuition fees and subsistence. Apprentices don’t get paid much but it’s a great deal better than having to pay to train. “No brainer really!” she concluded adding that her apprenticeship included day release to college for NVQs etc.

Another key point about apprenticeships is that because you’re working with professionals every day you build up a useful network of contacts. The two former apprentices I was talking to (the other did her apprenticeship in metalwork at Royal Opera House)  have worked since they “graduated” at, for example, The Young Vic, National Theatre, Opera Holland Park, Arts Ed Schools and Hampstead Theatre among others.

It’s highly regrettable  that there aren’t more of these opportunities but they cost money and need support from government to make them viable. Big venues and companies such as National Theatre, Royal Opera House and RSC have now got well established, quite far reaching schemes. Across the country many other companies are doing the same thing typically with smaller numbers and very often targeting young people for whom drama school is beyond reach anyway. Overall, though, the numbers are small. Yet the industry is still warning of serious skills shortages.

University/higher education is simply not suitable for everyone (or even for the much vaunted 50% of the age group) for all sorts of reasons.

In the performing arts industries we need two things to change.

First we have to find ways of penetrating the insular ignorance of many teachers and careers advisers. School students are entitled to be told about every possible opportunity and way forward. There are many more options than  the bleakness of either go to drama school or forget theatre altogether. Big performing arts companies employ almost every skill. If you want to do engineering but love theatre there’s a niche for you in scenic design and/or construction. Determined to be an accountant? Well performing arts companies have finance departments too. Keen on textiles and costume design? Well every show has to be “dressed”.

Second, we need many more learn-on-the-job opportunities so that young enthusiasts are not lost at the first hurdle because they don’t have the A levels for a university controlled course or are daunted (precluded, even) by the cost.

Well I don’t really “do” politics but there’s an election coming up. We all know that election promises are paper thin. At the last election the Conservatives promised 3 million apprenticeships (not just in performing arts, obviously) by 2020. It didn’t happen. Labour is now committing itself to 320,000 “climate apprenticeships” across all industries during its first term in office. Could they? Maybe, but I wouldn’t bank on it.

Actually I’m not convinced that the outcome on 12 December will change anything much on the apprenticeship front. And that’s a great pity both for the creative industries and for the many young people who simply don’t get the opportunity to make the best of their talents and make a decent living. 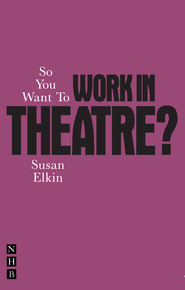 My book about backstage careers, So You Want to Work in Theatre? is published by Nick Hern Books. https://www.nickhernbooks.co.uk/so-you-want-to-work-in-theatre