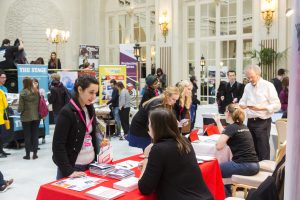 Last week I went to TheatreCraft 2016, the eleventh annual “beyond the stage” careers event which routinely attracts over 1000 people, most of them young. This time it was based at the Waldorf Hilton Hotel in Aldwych – with seminars and sessions running in nearby theatres – which worked very conveniently. The light bright open space in the hotel was ideal for the “marketplace” and several exhibitors told me approvingly they had more room than usual.

TheatreCraft is run by Theatre Royal Haymarket’s Master Class initiative in partnership with Royal Opera House, Mousetrap Theatre Projects and Society of London Theatre. Over the last decade or so I’ve watched it outgrow the foyers of Theatre Royal Haymarket and move to the Floral Hall at ROH. And now to the Waldorf Hilton.

It has always been difficult to get awareness of careers in directing, producing, playwriting, lighting, stage management, PR and the rest into schools. Pupils, parents and teachers see what happens on stage but often have little understanding of the infrastructure which supports it. That is why I wrote a book in 2013 – So You Want to Work in Theatre, NHB – to try and get some of this information across.

TheatreCraft is another excellent source of expertise and advice and it’s always encouraging to see young people being brought to it in school and college groups by their enlightened teachers.

This year there were technical departments from – for example – Guildhall School of Music and Drama, East 15, Mountview, Central and GSA along with universities such as Nottingham Trent, South Wales and Aberystwyth which offer courses in various sorts of design. Lots of organisations such as NYT, Theatres Trust, Equity were there too along with representatives from lots of  companies and venues offering training, apprenticeships and other opportunities. There was also lots to learn in workshops of which a really indefatigable person could have fitted nine or ten into the day from learning about scenic art from ROH’s Emma Troubridge to approaching plays with Blanche 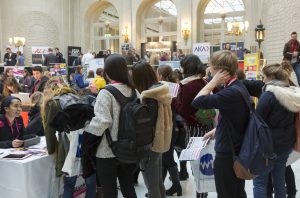 MacIntyre or touring theatre with James Quaife among much else.

All in all then, a fine and worthwhile day for anyone who wants to work in theatre in almost any capacity. My worry is that although a thousand people is a good number, in national terms this is a drop in the ocean. Moreover the young people there are the ones whom someone has encouraged to come. What about their counterparts in other parts of the country or in schools and colleges where no one knows enough even to point them in the right direction? There is still a huge job to be done in off-stage careers education.

All photos by Andy Barker