No, no, no to scoffing and boozing in theatres 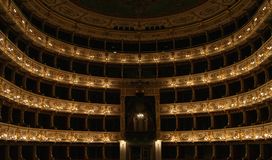 A theatre is not a picnic park. The play’s the thing. Eating and drinking are for elsewhere. There has been a lot of debate about this lately in the pages of The Stage and on social networks. So it’s time I weighed in. Obviously.

Traditionally gentlemen bought rustly chocolates to impress the ladies they were entertaining. Theatres sold said expensive chocolates at huge profits. Some still do. And they shouldn’t. Given the price of theatre tickets these days there is no excuse for further profiteering.

Worse – much worse –  are the snacks cheerfully sold in many theatres to encourage punters first to open their wallets and second to disturb people around them. And the very worst offender is popcorn because it smells so frightful.

Then there’s the stuff people bring in – and nobody stops them. I’ve sat next to people eating sandwiches, crunching crisps like manic goats and even, on one occasion, eating a Chinese takeaway with a fork. Nice, if you’re the consumer and you’re hungry maybe but just imagine the stench for everyone else.

And that’s before you start on drink. Theatre bars are there to make (handsome) profits. So the general rule is now that anything goes provided it’s in a plastic glass – and you bought it in the theatre. Woe betide you, incidentally, if you got it elsewhere. On the one occasion I arrived at an 11.00 am children’s show having travelled for two hours and just had time to buy a cup of tea in a lidded cup from the coffee shop over the road, Front of House was down on me like a ton if bricks and I had to dump it. So this ‘relaxed’ attitude is definitely about profits rather than about the comfort, convenience or pleasure of theatre goers.

Most theatre seats are very cramped. They make economy class look quite luxurious. We sit so close to strangers in theatres that under other circumstances we might regard it as an invasion of personal space. That is why –  if we are to share and enjoy the enhancing experience of theatre –  it is vital that we respect each other. And, as far as I’m concerned, that does not include having someone else’s beer or wine poured on my feet or in my lap, usually by that couple who are – naturally –  last in because they bought the seats in the middle.

We could change this culture. There is absolutely no need for snacking at the theatre. Sixty to ninety minutes is the usual  maximum between breaks. No one will die of hunger or thirst in that time. Stewards at The Globe are successfully vigilant about cameras. The same attention could easily be paid to food and drink. Children’s theatres, Unicorn and Polka have a no eating and drinking rule and it’s fine.

Meanwhile I shall continue to glare – with as much disapproving venom as I can muster –  at the crunchers, rustlers and munchers with their smelly snacks along with the teetering bearers of those full glasses in a very confined space. But I could do with some support.