Nothing passive about these LIPA grads

Lago Theatre Company is a fine example of how theatrical entrepreneurialism – aka “making your own work” – can work, and work well for new or newish graduate actors. Rob Hadden, Jack West, Joshua Glenister and Peter Lofsgaard, trained together at LIPA. Drama School is where you start to build the contacts network which will sustain your career and these four got together and started Lago Theatre Company, named after the Liverpool pub in which some of their early ideas were hatched.

I first encountered them in No Help Sent at Tristan Bates theatre a year or two ago. Since then I’ve seen and enjoyed Wine and attended a rehearsed reading of Revelation 1:18. Now the three plays, all written by West, are just completing a short rep season at Tristan Bates where I saw and reviewed them admiringly on a single evening last month. The other three founders appear in some of the plays (and do other work elsewhere as and when, obviously) with Harriet  Clarke who trained with them at LIPA playing the only female role. They also work with other directors and bring in additional actors as needed. Revelation 1:18, which West directs, has been shortlisted for an Offie which I’m delighted about because it’s a good play and I approve passionately of the way in which it has been developed by this young company.

The training industry has changed a lot in recent years. Today, all drama schools worth their salt teach their students to be proactive rather than passively (despairingly?) waiting for the phone to ring with job offers and LIPA does this particularly well. So committed is the college to encouraging students, graduands and graduates to form companies and create shows that it will sometimes  support such projects with grants. And, starting this autumn, LIPA has a new MA which focuses entirely on helping students to take charge of their own careers by preparing original work for touring. MA Acting (Company) runs in association with Liverpool Everyman and Playhouse.

Meanwhile I shall continue to follow Lago and all who sail therein because they really are a rather good case study and I’m intrigued to see what they do next. 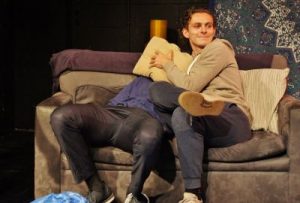