Dear Joanna (if I may)

You and I don’t have much in common, apart maybe, from a love of, and involvement with theatre. I don’t have your sexy voice, lovely figure or that infinitesimal something which seems to drive apparently level headed chaps bonkers.

But we are definitely at one when it comes to lavatories for women in theatres. They are often demeaningly appalling. There aren’t usually enough of them and the plumbing is frequently substandard which leads to blockages, failure to flush and … well we both know what it’s like, don’t we? Unlike the men who design and manage but never use them.

I’ve written about this so many times that other journos and theatre people often send me links and jokes about it … “Here’s one on theatre lavatories for Susan”.

So: warmest congratulations on your The Old Vic campaign (with Glenda Jackson and Bertie Carvel who presumably doesn’t frequent the ladies’ loos but is sympathetic) to double the number there. I gather that the theatre has launched a £100,000 public fundraising campaign to help it carry out major works which will include more lavatories for women. Hurrah and thank you.

What we need, of course, is plenty of properly plumbed roomy cubicles but for goodness sake don’t let anyone site wash hand basins and mirrors inside because it makes the queues even slower. Communal handwashing is much niftier.

But please don’t stop at The Old Vic, Joanna. What about Fortune Theatre which has, in my view, the worst theatre ladies’ toilets in London? And facilities are appalling at Ambassadors Theatre. Now that the deal for ownership of the latter to pass from Stephen Waley-Cohen to Cameron Macintosh has fallen through I worry even more about those lavatories because they are no longer likely to be on anyone’s priority list. Ladies’ loos aren’t much cop at the Vaudeville either. And I could go on. I won’t though because you know all this as well as I do.

Now, given all your aforementioned useful qualities, Joanna, you could get attention from lots of influential blokes and get this thing off the ground in a way that I can’t. How about a Joanna Lumley Theatre Loos Campaign? (JLTLC)? I’ll be your number one supporter. 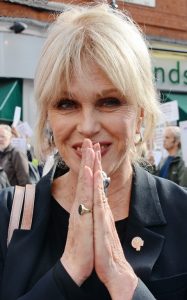