This accomplished revival of Leoncavallo’s 1900 opera makes you wonder why it isn’t performed more often. It was entirely new to me – hitherto my acquaintance with Leoncavallo stopped at Pagliacci. I found it a piece full of harmonic lushness, imaginatively witty orchestration and a great deal of 3|4 and 6|8. It also has what musical theatre people call a strong “book”. The words are by Leoncavallo too and they tell a powerful story of an actress with a past who falls deeply in love with a man she later discovers to be married. There is nothing remotely fantastical or fey about any of it. The composer’s intention was to explore just how far the grittiness of real life could be presented through opera. 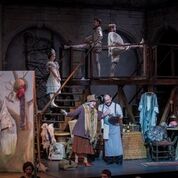 At the heart of this production, directed by Marie Lambert, is a stunning performance by Anne Sophie Duprels as Zaza. It’s a massive role – and a plum part  – and she is rarely off stage in two and a half hours. Looking like a young Imelda Staunton, Duprels finds warmth, passion, despair, affection, anguish, regret and much more. Her singing and acting are immaculately nuanced and sustained.

As the two men in her life Joel Montero (tenor) as Milo and Richard Burkhard (baritone) as Cascart create triangular tension. Montero sings with charismatic appeal – the man (and we’ve all met him!) who thinks he’s entitled to have his cake and eat it regardless of anyone else’s feelings. Burkhard’s Cascart, former lover now friend, counsels, advises and supports her with gravitas and a pleasingly commanding voice.

Among the support roles there’s incisive work from Ellie Edmonds as the pregnant Natalia, Zaza’s dresser and confidante. Louise Winter is both funny and mildly moving as Zaza’s mother who also has a chequered past.

Designing a set for Holland Park’s very wide space must always be a challenge but Alyson Cummins has come up trumps for this production. In the first half of this four act opera Zaza’s dressing room is centre stage while the stage right space gives us a sideways view of the comedy club show which proceeds continuously. Stage left is occupied by Natalia’s costume store where she sits and knits (for the baby?) when she’s not with Zaza and over it is a walkway meant to suggest the way in and out of the building. It’s very ingenious use of space although the later boring, projected Eiffel Tower to suggest Paris looked as if the budget had run out after Acts 1 and 2. 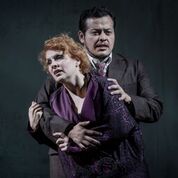 City of London Sinfonia, meanwhile, does an enjoyable job under Peter Robinson’s baton in Holland Park’s shallow pit which means all players are on view and double bass scrolls sit four feet over the footlights. The advantage is acoustic, though. Orchestral detail is crystal clear – Deborah Davis’s piccolo interjections for example, some delightfully evocative horn work and some pleasing solos from leader Gabrielle Painter.