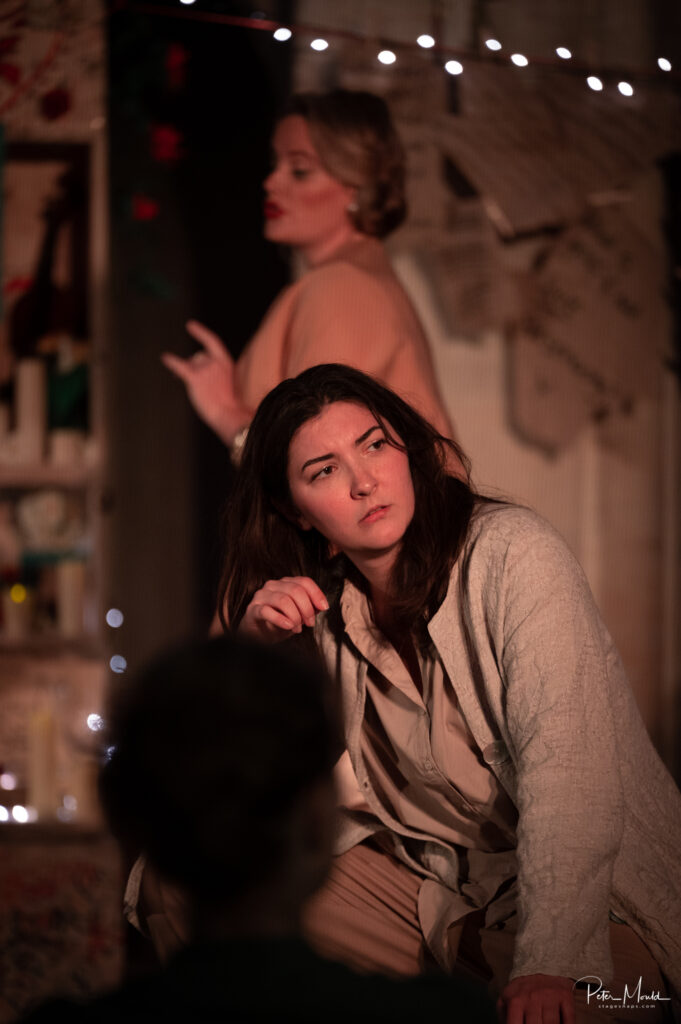 This neat double bill sets a pared down version of Gluck’s 1762 three act opera alongside Mascagni’s 40 minute Zanetto (1896) and it makes a pleasingly accessible evening of opera, running less than two hours in total. Surtitles clarify the storytelling so that we can enjoy the musicality of the original Italian.

It’s an almost all female project too with an on stage band comprising Lesley-Anne Sammons directing the music from keyboard with Lucy Mulgan on guitar and double bass. The cast – three for Gluck and two for Mascagni – is all women too.

And that brings me to the glorious alto performance from Emma Roberts as Orfeo and then – a very different role – as the travelling musician, Zanetto. Roberts can really act convincingly which is vital in this bijoux performance in an intimately small space. And she is adept at carving out resonant low notes and making them speak poignantly. It isn’t easy to deliver a pot boiler like Che faro senza Euridice and carry it off as if it’s fresh because nearly everyone in the room has vivid sound memories of Kathleen Ferrier and Janet Baker. Roberts, however, does a fine job, packed with anguish as she mourns over the body of the now finally lost Euridice (Lizzie Holmes) and I was moved by her poignant ornamentation on the final repeat. In Orfeo ed Euridice we also hear/see Laura West, 19, as a silver-voiced, cheeky, smiling Amore. She has charisma already.

Lizzie Holmes comes into her own as Silvia in Zanetto. It is, of course, a very different musical world from Gluck and she gives us a lonely but very worldly “hostess” who finds herself drawn to the young musician who asks her for help. She is troubled by her own mixed feelings and her soprano singing usually supports that strongly. There’s some sensitive duet work with the Roberts as the insouciant Zanetto too.

Several things strike me about this enjoyable project. First, it’s a good showcase for the versatility of young singers because the roles they play in the two works are quite different. Second, I’m all in favour of chamber opera companies working in small spaces on low budgets because it makes opera available and affordable for people who simply can’t afford Royal Opera House, ENO or Glyndebourne. Third the two musicians wear white rather than black which makes a cheerfully fresh statement. Why should such talented people try to efface themselves in black?