I’m often invited to drama schools – to see shows, meet students, admire premises, chat to staff or whatever. I’ve been to all the twenty or so which are regarded as “top” schools because they have formal accreditation and/or are part of, or accredited by, universities. These are the ones whose students are entitled to funding in the form of loans or sometimes DaDA awards

I’ve also spent plenty of time in schools which are not part of this group. You don’t have to attend GSMD, Birmingham Conservatoire, Oxford School of Drama or one of around seventeen others to succeed in this industry although, in practice, most do. The funding issue is often what swings it.

Of course there’s much to be said for tried and tested training – with decades of alumni (and funding). On the other hand things and times change and there are plenty of newer schools doing things differently but worth considering even though they don’t yet qualify for funding so students have to be self financing.

The most recent of these to invite me in was Emil Dale Studios in Hitchin, Hertfordshire, where I spent a couple of hours last week.

The eponymous Dale grew up the child of a single, immigrant parent on a council estate and, at one point lived in a hostel. So there was absolutely so money to invest in starting a drama school.  Now 33, he trained at ArtsEd, “didn’t much like performing” and started a weekend school for children and teenagers in Hitchin in 2009. It was very successful and his business has built up fast on the back of it. Today he has over 300 young weekly participants and another 100 in Cambridge.

He has nicely refurbished premises on an industrial estate on the edge of the town and is currently converting a second nearby building. He runs an “academy” which he started in 2014. This is a full time Level 3 extended Diploma in Performing Arts for 16-18 year olds, in partnership with Knights Templar School at nearby Baldock. For this, because it’s further education, there is some government funding. At present there are 35 students on the first year and 41 on the second.

Then – Dale is nothing if not entrepreneurial –  came the  idea for a “Gap year course” which is a full time foundation course at the end of which some students get work, some go on to drama school and, as you’d expect, others go off and do something else.

This term, because there seemed to be a “niche in the market,” Dale and his four full time colleagues launched a three year vocational diploma course. 37 students are enrolled on it. “We’re attractive to parents” Sarah Moore, Dale’s Operations Manager, tells me. “It’s not London so rents are lower and we can keep fees down to £7,500 a year. We teach 33 weeks a year and they have 36 hours of contact time each week so the training is comparable with a degree.”

I can’t fault any of the work I see. Teachers are mostly part-timers and many of them also work in the industry or have done until recently and guest tutors are invited in. I like the diploma singing lesson I hear part of and a dance class we pass through as I’m shown round.   But I worry more than a little about the numbers and the speed of expansion.  Most new colleges struggle to find an initial high quality intake because they have no proven outcomes so any student who enrols is taking a big gamble.

Emil Dale has managed to sign up 37. Now, some of those will have come up though his other courses, but I can’t help wondering just how stringent the auditions were and how many of those 37 will find work at the end of three years. And there will be another intake next year and the year after until the whole three year course has over 130 students. The industry is already saturated with talent. 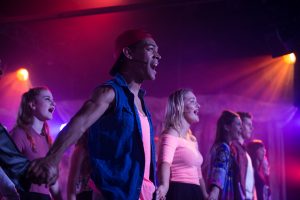 I have promised to see an Emil Dale Studios show before too long. They use their own on-site studio theatre (Factory Playhouse, Hitchin) and the Gordon Craig Theatre in Stevenage. “The shows are commercial and bring in income which helps to keep fees down” says Moore adding that in recent years EDS students have staged Grease, West Side Story and Hairspray. They did a successful Les Miserables in May, this year. I shall be interested to see the quality of the work.