When Richard Morrison interviewed the Greek/Russian Teodor Currentzis for The Times, ahead of the latter’s Proms debut Morrison told us to expect “Beethoven as you’ve never heard it before.” And he was right. 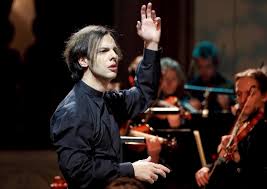 This concert which featured the second and fifth symphonies gave us highly charismatic playing and two very individualistic, exaggerated performances. Anyone who can – upper strings, woodwind, some brass – stands to play in Currentzis’s original instruments band from Perm in Siberia. There are few chairs on stage. The result is a lot of passion and free movement so that the rhythm becomes visual as well as aural. Sometimes it’s almost balletic.

Tall slender Currentzis himself is pretty dramatic too. Clad in a short shirt, leggings and silver shoes he has a strange habit of starting the music very abruptly almost before he’s reached the podium. He uses a lot of baton-free impassioned gesture, including much expressive face work and sometimes, when he wants a piano so soft that it almost disappears, he stands virtually still. And of course he rarely does anything as pedestrian as beating time.

The quality of the sound is often magical. The sombre gentleness of wooden flutes, oboes and bassoons combined with gut (or some appropriate substitute?) strings ensures a warmth and intensity you don’t often hear in orchestras using modern instruments. And, as you’d expect, Currentzis takes every allegro at the sort of breathtaking speed  adherence to Beethoven’s metronome markings requires – although it’s not, even today, what we’re used to. I remember Klemperer’s Beethoven, for example, and most of us own recordings which take much of these works at a pretty leisurely pace, despite the efforts in recent year of conductors such as John Eliot Gardiner and Roger Norrington to change our perceptions.

High spots included the final Allegro molto in the second symphony which never lost a scrap of precision despite the dizzying speed. I also appreciated the well judged quiet wittiness in the larghetto. These people can make a simple scale sound like the pinnacle of musical inventiveness.

After the interval, the opening of the fifth symphony sounded joyous rather than portentous – just lots and lots of brio. The andante was very memorable too with a strong sense of duet between first and second violins, split across the space either side of Currentzis. There was also some lovely work from the wooden piccolo and some flamboyantly pointed dynamics in the final allegro. I was puzzled though, by a persistent vibratory buzzing in the fortissimo passages which I found distracting.

All in all it was a most interesting evening – and certainly one which will stand in the memory. I’m not sure, however, I’d want my Beethoven served up like this all the time. There is a faint whiff of arrogance about Currentzis. It came through in Morrison’s interview and I felt it from the podium – a sort of messianic self belief as if he thinks he has all the answers. There is room for as many interpretations and approaches as there are conductors and orchestras. Currentzsis’s take is an intriguing exploration of possibilities. It isn’t the last word on Beethoven.