This production of Mozart’s last opera Die Zauberflote is characterised by fine orchestral work, much impeccable singing –  and a great deal of directorial gimmickry.

We all know that this is a surreal piece rooted in the mysteries of eighteenth century freemasonry but I have no idea at all why Andre Barbe saw fit, apparently, to set it in the kitchens at Downton Abbey in which servants wear light up head dresses, calves are butchered and puppetry rules the day. And why does the Second Lady have a jelly mould on her head? Your guess is, I suspect, as good as mine. 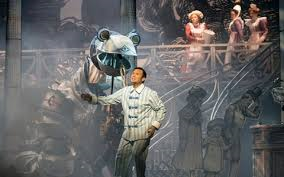 Semi staging (by Donna Stirrup) usually works well at the Proms but on this occasion, frankly, I’d have preferred simply to listen to some of the best music in the Mozart oeuvre sung straight as a concert – although the snake/dragon made of giant tea plates, at the very beginning, puppeted by a line of performers as in a Chinese street party was rather good.

Bjorn Burger delights as the mercurial baritone Papageno. He acts beautifully, is lithely funny and sings each of his famous numbers arrestingly. His final “clinch” with Papagena (Alison Rose – good) is gratuitously groteseque, however.

David Portillo, tenor, brings warmth and conviction to Tamino and soprano Sofia Fomina sings Pamina well enough (some nice lyrical singing) although her frumpy manner and outfit failed to convince me that he would have fallen for her quite so determinedly.

Caroline Wettergreen as Queen of the Night presents a suitably witchy figure in plum velvet and stops the show – as usual – with her glittering act two aria.

And behind all this is Ryan Wigglesworth expertly managing this very large production (the chorus is often lined up behind the Orchestra of the Age of Enlightenment and characters frequently appear at the very edge of the upper playing space on mini balconies) without score. I was especially impressed with the care he took to support the three boys (Daniel Todd, Simeon Wren and Felix Barry-Casademunt) mouthing every word and turning to look at them. I liked the original instruments brass sound too.

It was an enjoyable evening but, given the visual nonsense on stage, I half wished I’d stayed at home and listened to it on the radio.