As soon as the 2018 Proms Youth Choir sang the first vibrant note of Eriks Esenvalds’s unaccompanied setting of Longfellow’s sonnet “A Shadow”, you knew that this was going to be quite an evening. Two hundred and fifty singers seated in one stage-right huge bank created a very warm strong sound which burst joyfully through the grandiloquent Royal Albert Hall acoustic. And if some of the exposed top soprano notes felt a bit strained, well I can live with that. It will be a long time before I forget this piece – a first performance – which ends with the choir whistling and the sound slowly dying away to the tinkling of bells and small glockenspiels in the hands of some of the choir members. The choir consists of University of Birmingham Voices, University of Aberdeen Chamber Choir, North East Choir and BBC Proms Youth Choir Academy. Each group had trained separately and then come together for a four day intensive rehearsal residency led by Chorus Director, Simon Halsey who conducted this fine performance. 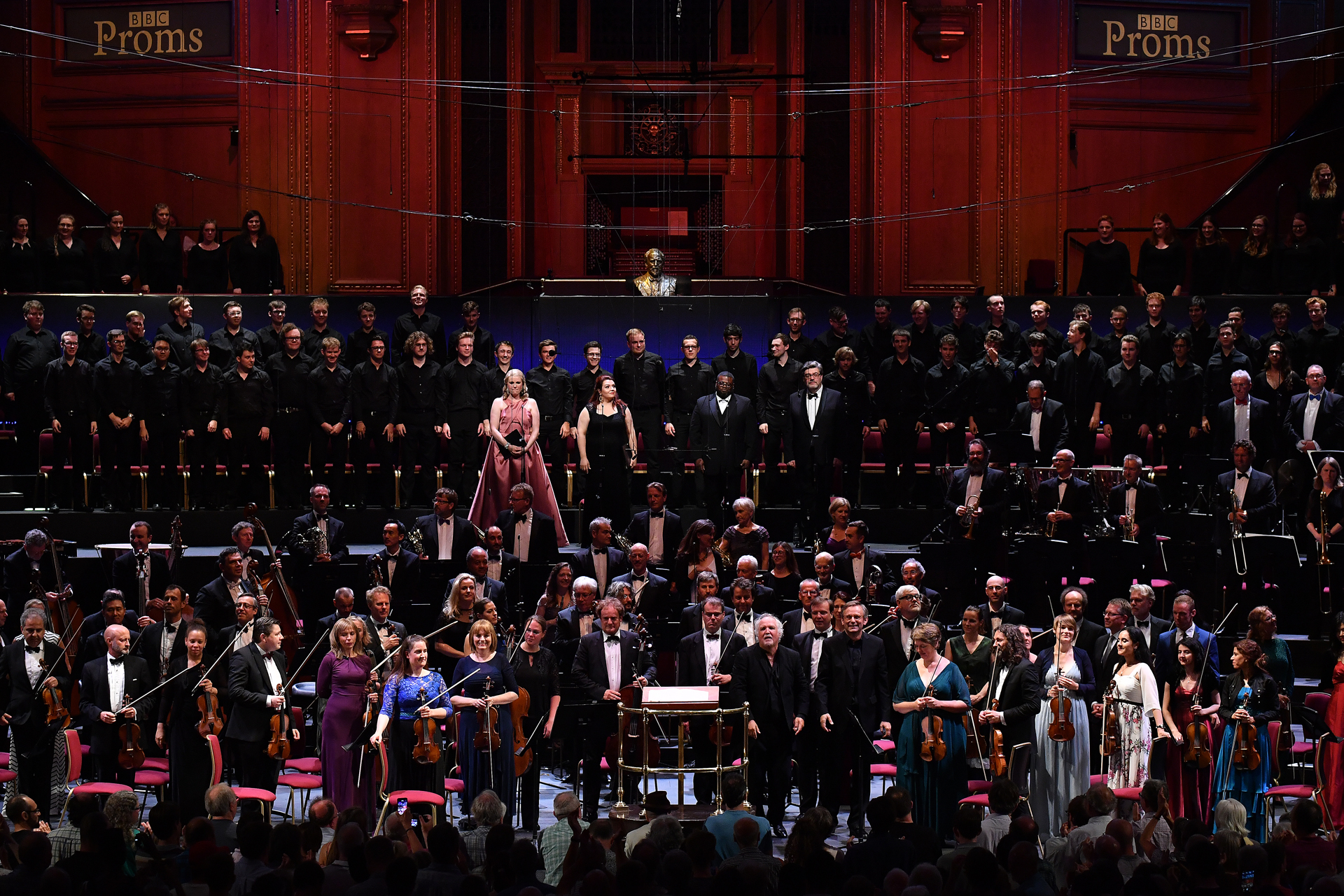 Next, in a concert entitled War and Peace, came Britten’s Sinfonia da Requiem played by Georg Solti’s World Orchestra for Peace which draws players from orchestras based in several continents. They’d sat quietly waiting in position during the opener. And if I may be allowed a “girly” observation it’s good to see a band in which the women dress in different colours. Visually very jolly. Coloured shirts for the chaps next, please.

Donald Runnicles splits his first and second violins across the stage which, as always, makes the lower strings sound more integrated – especially in the pizzicato section in the third movement’s lush (hopeful?) conclusion. The second movement was memorable too. With its col legno tattoo rhythm, snare drum and trumpet tune it really was Dies Irae and – in a piece which ensures that all four percussionists work hard for their fee – the decelerandoending with all those offset notes from different sections is not for the faint hearted. This lot brought it off with all the passion and panache it needs.

But the jewel in the crown was the magnificent account of Beethoven’s Choral Symphony which formed the second half – the choir now re-grouped evenly behind the orchestra. I have actually sung this piece in the Royal Albert Hall and so understand well the problems of the conductor being a very long way away – not an issue at this performance, partly because the impeccably trained choir sang without copies so that their responses were impeccably precise.

Runnicles gave us lots of sensitivity and colour in the first three movement with effectively exaggerated piano passages in the first and close attention to the detail with some very crisp string runs in the second – as well as making the very best of one of my favourite moments when the timpani take over from the bassoon lead and we’re into anticipation and excitement.  The lilting lyricism of the third movement was tenderly clear too with emphasis on delicate pairings of instruments which sometimes get lost in the texture.

Introducing the Ode to Joy theme at a brisk tempo and very softly left Runnicles with plenty of colourful, dramatics places to go and he certainly did – inspired perhaps by the fabulous quality of the choral singing (four good soloists too but somehow – seated between the orchestra and choir they seemed almost secondary in this performance). Verbal precision and very accurate pitching drove the piece along to its triumphant conclusion – any nervousness now forgotten as the sopranos sailed through those sublime, long high notes. Bravo to all concerned.