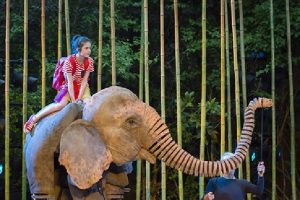 Remember Joey from War Horse? Well, meet Oona the elephant. She’s full size and spectacular. Puppeted by four people, three inside her and one on her serpentine expressive trunk, she flaps her ears, rocks her head, farts and responds to everything going on around her. There’s also a magnificent tiger, pounding and snarling, a terrifying crocodile, a whole colony of orang-utans along with stick puppets representing bird, fish and butterflies. It’s an entire, wow-factor ecology in puppetry. Full marks to puppet makers Finn Caldwell and Toby Olié and the performers who operate these wonders!

Regents Park is colourfully transformed into a magical and breath-taking tropical rain forest in Indonesia by Paul Will’s bamboo pole set in harmony with the real trees which surround the stage.

Michael Morpurgo’s tsunami story about a British child who was rescued by a beach elephant and then lived wild in the forest until eventually found by a wildlife conservationist has been adapted for theatre by Samuel Adamson. It is a transfer from Chichester Festival Theatre where it played as a promenade piece last summer.

The large ensemble provides sound effects, imaginatively choreographed (by Georgina Lamb) movement and uses a simple but effective form of choral speaking. It is drawn largely from London schools. A cast of adult actors works among them when not playing specific roles.

At the heart of all this is Ava Potter as Lilly – alternating with two boys as Will. It was Ava in the performance I saw. Rarely off stage she’s a very compelling actor. She is grief stricken at the loss of her father at the beginning, terrified when the tsunami strikes, in total harmony with Oona and angry at some of what happens in the forest. It’s a remarkable performance for one so young – nuanced, convincing and skilfully controlled.

Michael Morpurgo’s writing is always sentimental and his anti-war views are as strong in Running Wild as they are in, for example War Horse or Private Peaceful. This show stops short of mawkishness, however, partly because of the horror of the hunters. Family audiences (and school parties) have to think about the complex issues relating to palm oil production and the need for poor people (exploited by ruthless rich ones) somehow to make a living. Because it’s such a watchable piece the “worthiness” doesn’t grate too much.