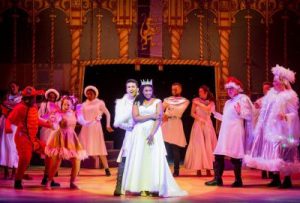 Stronger on storytelling than really good jokes, this is a feisty reworking of the traditional Sleeping Beauty tale for the enlightened, liberal people of Hackney. Beauty (Alexia Khadine, who has a magnificent mezzo singing voice) is awakened from her curse-induced coma by her nanny (Gavin Spokes playing a fairly low key Dame). She is then armed for combat by the fairies and goes off to rescue her prince (Wayne Perry) from the clutches of evil. It’s a neat reversal and as one of the fairies remarks to the audience: “You see! The Brothers Grimm didn’t always get it right!”

So it’s a political pantomime for Hackney. There are a lot of jibes about, for example, Brexit including a song called “Never ask the people what they think”. We also get a rather laboured running gag about the court jester who has left his post to become the new Foreign Secretary. None of this sits very happily in what is meant, first and foremost surely, to be a children’s show although the (largely adult) audience on press night lapped it up and turned the final ten minutes into a pretty riotous party by dancing, almost literally, in the aisles.

There’s plenty to enjoy though. Darren Hart who has an elastic body and a terrific range of funny, rueful, cunning facial expressions is very good value as Ikabo. Sharon D Clarke plays a statuesque, charismatic imposing Carabosse somewhere between Katisha, Brunhilde and Cleo Laine. Kiruna Stamell is entertaining as the shortest member of the good fairy trio often flying incongruously but convincingly over the action. And there’s some fine ensemble work particularly in the scenes with wolves supporting Carabosse. Moreover, the sparkling five piece live band led by MD Mark Dickman is one of the best things in the whole show.

High spots include a slick “slosh routine” performed quasi-balletically to music in the manner of a silent film. And there are some entertaining special effects with lights, ultra-violet and puppets in the second half when the Prince goes hacking through the brambles to find the castle.

Generally speaking though I found this panto somewhat unfunny and a bit forced in places. It seems very long at 2 hrs 40 minutes too. I was delighted though to see the full stage crew brought on for applause at curtain call. Good for democratic Hackney. Why doesn’t this happen at every show to remind the audience that there’s a great deal more to theatre than what they see?