BAN (British Actors Network) was set up in 2012 and now has over 18,000 members. “The group has grown organically by word of mouth as it is not searchable on FB (set to private) to stop bots and spam accounts finding us,” says spokesperson, Helen Raw – which would explain why BAN has, until now, slipped under my radar. A website is in preparation.

Everyone in the group is vetted and checked to make sure they have something to do with the industry. “We take in everyone at all stages of their career: beginners, am drammers looking to make the move to pro, and everyone in between” says Raw.

So what does BAN actually do? “We have shut down scams, been vocal about Spotlight’s stance on allowing unpaid work on their platform and all sorts of other issues. We speak out against the bullies and let actors know what due diligence they should be doing before agreeing to auditions and jobs” says Raw. “I am an elected Equity Branch Committee member and BAN does, and will continue to, work closely with the relevant Unions but they can only do so much.”

And that’s the problem. How does a demonstrably useful organisation like this operate without funding or proper support?

“We have raised £16,760 so far from 311 Founding Members and 7 donating supporters, which is great but way off target.” Raw tells me.

“Our fundraising strategy was to get 800 BAN members to pay £51 Founding Member investment (which would give them certain privileges towards future BAN memberships and benefits) and bearing in mind that we were looking at 800 people out of 18,405 current BAN members we were sure there is enough BANers who appreciate the work BAN and I personally have done enough to support this cause.”

She continues: “£50 (£51 with Stripe fee) from 800 members would have  given us a £40K working cash injection to get things moving, The fundraising campaign kicked off on 21st November 2019 and our target was to get £20K by mid December and £40K by end of January.”

The money raised so far is being used to pay for the work: creating content for the current temporary website, proper web and casting site development, Mailchimp costs, domains, hosting etc. If BAN gets no further money into the pot, it only has enough to keep it all (and the 5 people behind the scenes) going until mid-May as they are all working on very reduced rates.

“If we get the rest of the money we need (around £25K) then, with very careful planning,  we can go until mid autumn  if need be before subscription and ad money starts to come in.” says Helen.

“The plan is that once BAN is properly up and running and out of ‘start-up and test site’ modes, ALL profit will go back to the members in the forms of free workshops, funds they can access to create their own work, a hardship fund etc.

Helen adds: “I have run BAN since 2012 with a colleague (who stepped down last summer) completely for free – giving out loads of advice, help, shutting down scams, collating complaints to take to Equity and the Police. My decision to move BAN out of the confines of Facebook were partly because I can no longer put in the time and hours it was (and is) taking up – unpaid – and because if we really are serious about making huge changes in the industry, running as a group out of Facebook just won’t cut the mustard.”

The bottom line is that this worthwhile organisation will fold unless many more of its members start supporting it – fast. 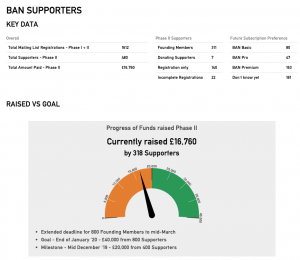