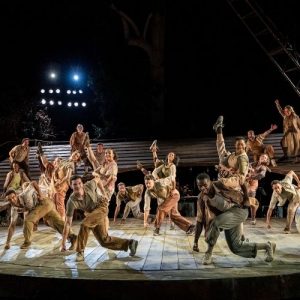 Rodgers and Hammerstein never sidestepped a gritty issue and their 1945 piece about domestic abuse is no exception – and could hardly, given how cases have risen during lockdowns, be more topical.

Yes, there are some very familiar good tunes in Carousel but there is also a great deal of profoundly shocking stuff – the audience gasped in horror more than once on press night – to make anyone who sees it think long and hard.

Of course the original, based on a short story by Ferenc Molnar, was set on the coast of New England. In Timothy Sheader’s thoughtful production we’re in the north of England and the cast members use their own accents, giving a rich variety and stressing the piece’s universality. The American references in the text don’t matter much either. It’s like seeing Julius Caesar set in a modern state. Your brain just accepts the relevance and allows for minor discrepancies …

Read the rest of this review at Musical Theatre Review: https://musicaltheatrereview.com/carousel-open-air-theatre-regents-park/