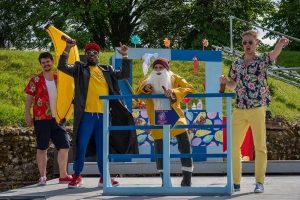 The Comedy of Errors continues at the Maltings Theatre, St Albans as part of the Roman Theatre Open Air Festival.

Imagine one of Shakespeare’s crazier comedic romps set in a Greek karaoke bar and you have a good vehicle for a funny play with songs.

This is The Comedy of Errors as you’ve probably never seen it before: a lot of fun and inching towards musical theatre as we hop from Sinatra to Queen to Abba to ‘I Do Like to Be Beside the Seaside’ and more. The incongruity is part of the joke.

Nothwithstanding the worry of the distressed Egeon (Matthew Parker, who also directs) condemned to death for turning up to search for his lost family, this play is mainly a sit-com about two sets of identical twins separated in infancy and now the victims of a great deal of mistaken identity …

Read the rest of this review at Musical Theatre Review: https://musicaltheatrereview.com/the-comedy-of-errors-maltings-theatre-st-albans/