Show: Shakespeare in Love and War

Society: Shakespeare at The George

Shakespeare in Love and War

Warmest congratulations to writer/director Richard Brown and the SATG company for coming up with an ingenious show which allows a cast of eleven  to distance, entertain a reduced audience while remaining true to everything the organisation stands for – and doing justice to the wonderful Jacobean courtyard which is The George’s big USP.

Reuben Milne – always a charismatic actor – is directing a show and we start with him and his stage manager, Maggie Redgrave (a good foil) quoting from plays and joshing each other. Disinfectant, wipes, distancing jokes and the occasional Brexit allusion are all part of the fun.

Then we get extracts from lots of plays with linking discussion between the director and stage manager and sometimes the actors. Asides aside (sorry) most of it is pure Shakespeare. It’s often funny, sometimes moving and nearly always well done – a rare opportunity for talented non professional actors to demonstrate real versatility.

I really liked, for example, James Barwise’s Henry V from egging his troops into Harfleur to wooing Princess Katherine (Rebecca Gilbert) in terrible French. And he does a fine St Crispin speech, understated and warm. I usually have to swallow the lump in my throat at this point and this account of a troubled king who expects to lose the battle was no exception. We also see Barwise as a suitably sardonic Berowne and a Benedick visibly coming to terms with his own reservations – among other roles

Ashton Cull is roundly convincing as lusty, pragmatic Falstaff and a seriously hedonistic Sir Toby Belch while Georgie Bickerdike (who dies several times in this show) gives us a lovely Juliet and a resolute Cordelia. Simon Maylor tackles with aplomb one of the most difficult scenes in Shakespeare Lear’s final speech over the dead body of Cordelia (“Howl, howl, howl, howl, howl”) and it’s a good moment. He is also, among other roles, a rather good Petruchio – wrestling with his Katherine (Charlotte Maylor) while they banter angrily towards the cunilingus passage, a bawdy reference missed by most of the audience. These two, incidentally, are the only two actors in this show allowed physical touch because they are wife and husband in real life.

Lynne Livingstone is strong in several roles but her Scots account of Malvolia picking up the gulling letter is as good as I’ve ever seen it. Similarly, in a show characterised by multi-roling I especially liked Jordan White’s soppy Sir Andrew Aguecheek and Ryan Coetsee’s take on Lear’s Fool

Spliced into this jolly melange is Sonnet 119, spoken rather well by Rebecca Gilbert, a couple of pretty songs (music by Ian Favell), a neat dance, a whole cast quick fire send up of As You Like It and a witty touch: every time Don John is mentioned, the whole cast choruses “The Bastard”. And the linking script – mostly Milne and Redgrave on either side of the stage –  is great fun and includes lines such as “Cupid doesn’t do sensible – quite the opposite” and a corny, but still funny, visual pun on beer and bier.

The courtyard is configured sideways for this production with free standing audience chairs in groups and the action on a simple pop up stage along one edge – not a million miles, I suspect, from how Shakespeare and co would have performed on tour when driven out of London by plague. Not much changes, really. 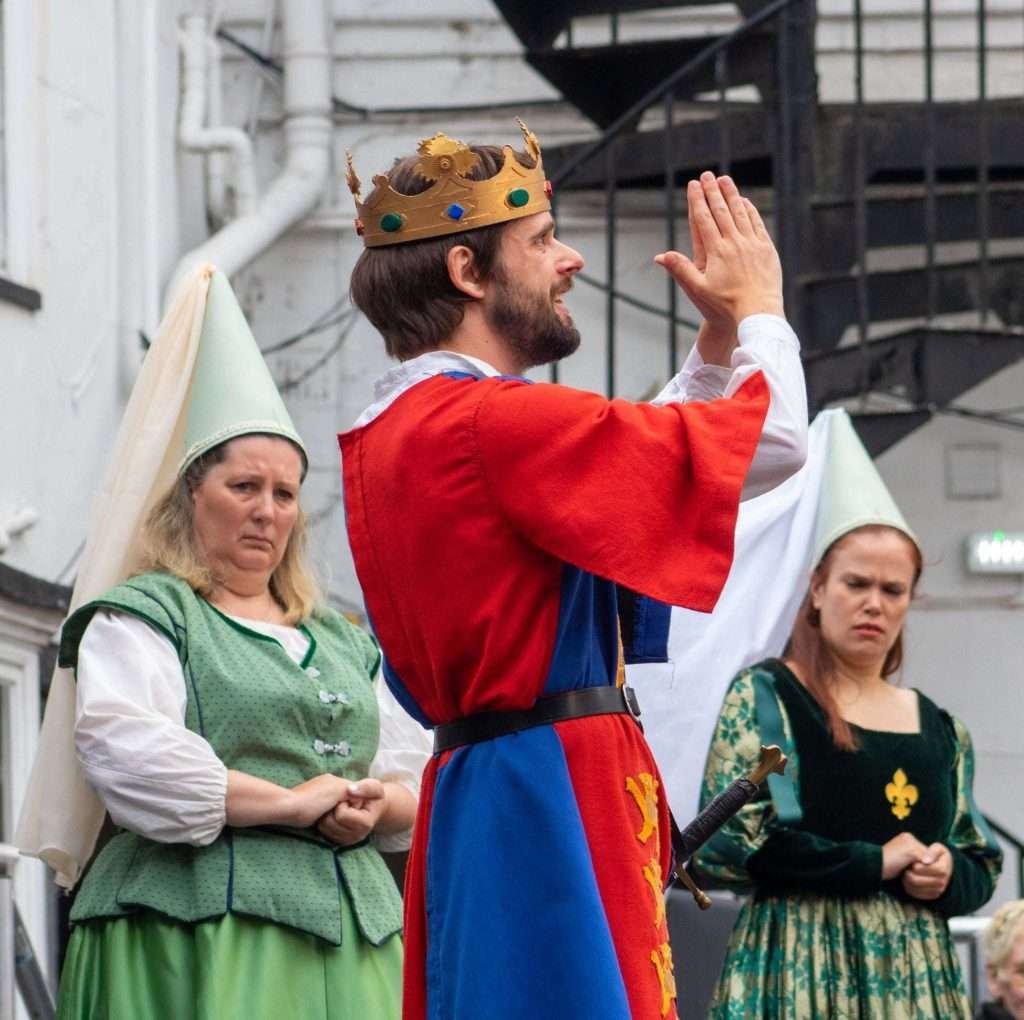 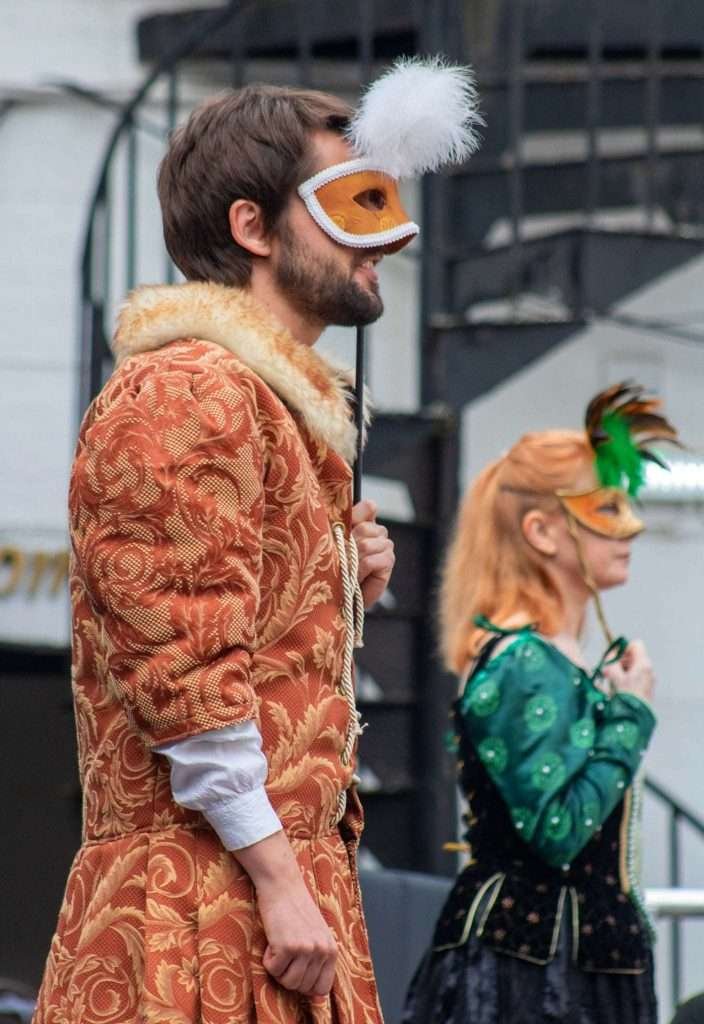 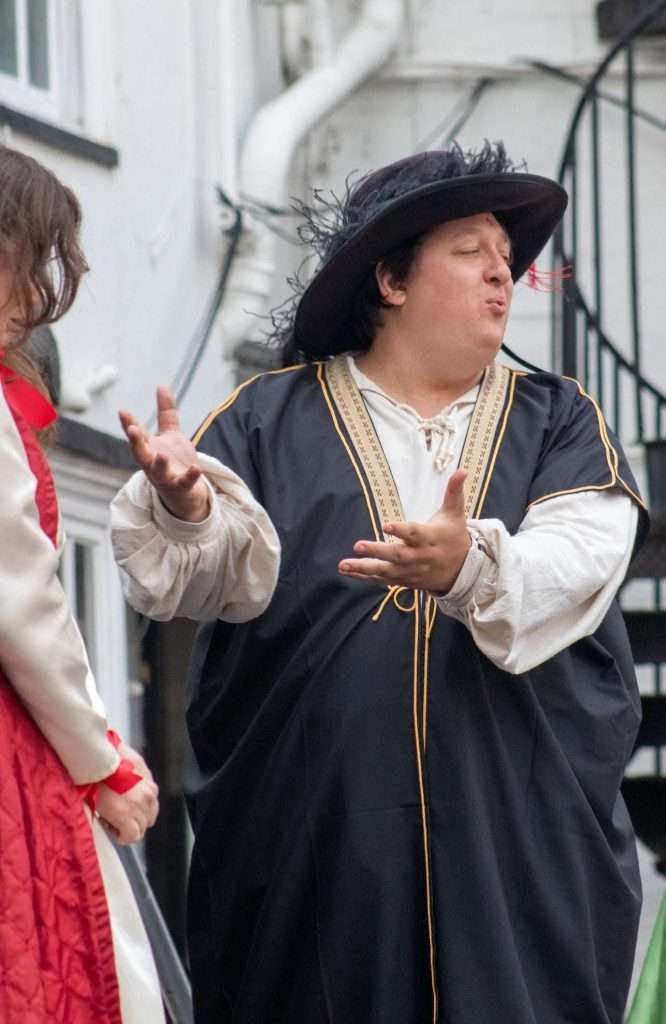 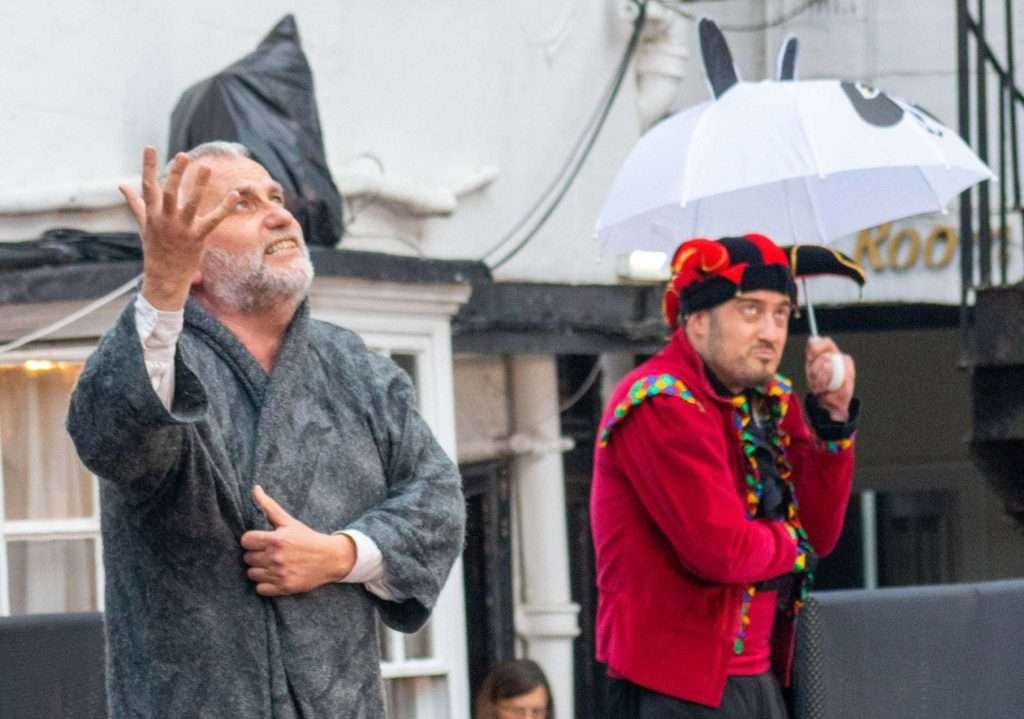 This review was first published by Sardines: https://www.sardinesmagazine.co.uk/review/shakespeare-in-love-and-war/