I first read Chocolat twenty three years ago when it was first published in 1999 and getting huge amounts of acclaim. All I remembered was that it was about chocolate making in a French village – with lots of colourful characters.

Having reread it now, I realise and remember that it’s about a great deal more than that. Chocolate is the novel’s metaphor for pleasure and free will and it’s pitted against the bigotry of some corners of the Catholic church which clings to its doctrines of sin and the need to forgo all sensual pleasure.

Vianne – with her young daughter Anouk and many memories of travelling the world with her otherworldly, perhaps psychic mother – arrives in the fictional Lansquenet-sur-Tannes, near Agen in south-west France at the beginning of Lent. There she decides to use her newly acquired skills as a chocolatière by opening a shop –  to the horror of the local priest, Reynaud. Vianne and Reynaud alternate as narrators.

Vianne is wise, kind and exceptionally perceptive. During the six weeks of the novel’s span with Easter as its climax she befriends a spirited elderly woman with a mind of her own – wonderful creation. She also supports the River People who arrive nearby and are met with a pretty solid wall of, as it turns out, criminal, vigilante prejudice. She takes in the wife of local café owner helping her to escape from a brutally abusive marriage. And she makes friends with locals who come to her café to drink her chocolate, eat her near-magical concoctions and bathe in her calm alternative to the church across the village square.

Reynaud’s chapters are addressed to his predecessor priest in the village – effectively his mentor and now comatose in care. Gradually we realise that there are dark secrets in the past which partly explain why he is as he is although Harris doesn’t exactly forgive him for the unhappiness he has caused. It’s just one of the many well drawn and nicely paced sub plots. Lovely old Armande’s relationship with her difficult bossy daughter and delightful poetry-loving grandson is another. So is the development of Josephine from terrorised wife into a confident, independent woman.

The writing is extraordinarily sensuous. You really can taste the chocolate and feel it texture in your mouth: “I poured a glass for myself, with noisette liqueur and hazelnut chips. The smell is warm and intoxicating, like that of a woodpile in the late autumn sun” or “I went into the kitchen and very slowly prepared the chocolate espresso. By the time I’d poured it, added cognac and chocolate chips, put the cups onto a yellow tray with a wrapped sugar lump in each saucer, she was calm again.” And at the end of the novel is a dinner party at which every dish is lovingly described – it’s climactic in more ways than one but no spoilers in case you haven’t read it.

In short I loved Chocolat  and admired it all over again. I don’t think I have ever seen the 2000 film in which Juliet Binoche played Vianne – if I have it must have made very little impression on me. I shall now however, having reread the book and thought a lot about it, give the film a whirl. I doubt that it manages to convey the chocolate experience as well as Harris’s words do but we’ll see. 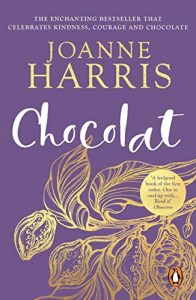 Next week on Susan’s Bookshelves: The Amazing Story of Adolphus Tips by Michael Morpurgo