It may be 45 years old now but, for me, The French Lieutenant’s Woman remains one of the most thoughtful and intelligent books of the second half of the twentieth century. I admired it when I first read it and it speaks to me even more compellingly now. It is effectively a critique of the “standard” (if there is such a thing) Victorian novel with its omniscient author and morally acceptable happy ending which usually means marriage.

John Fowles presents a lonely woman with – so the locals think – a murky past. She works as a companion for a seriously nasty widowed bigot in Lyme Regis (where, incidentally, the author lived in real life)  and whenever she can get away she waits silently on the famous Cob for the return of her French lover. Or at least that’s how it seems. Enter Charles Smithson, a comfortably-off and well educated amateur palaeontologist  and the pretty, pleasant but shallow heiress he intends to marry. Her father owns a thriving Oxford Street department  store. Trade! Cue for the usual shock and horror but this is 1867 and times are changing. Of course Charles is very curious about the strange woman he sees around the town or walking on the Undercliff and is gradually drawn in. 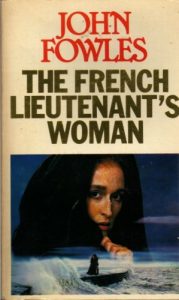 Nothing, however, is as it seems. The truth about who has done what, who feels what and why slips and slides around like quicksand. And Fowles never allows you to forget that this is a novel which he is controlling like a puppeteer. He is making choices and does so against a much discussed background of Victorian customs and mores – many of them fascinatingly contradictory. Why, for example, are “respectable” 19th century women expected to feel, need or demonstrate no sexual desire while prostitutes are trained to fake orgasms? There’s a fair amount of discursive comparison of then with “now” as it was in 1977.

At one point, near the end of the novel, Fowles wanders into the narrative as a character sitting near Smithson in a railway carriage – all done with insouciant wit. As the story, which has so gradually unwound, nears its conclusion he stands back and asks what he the author should do now? He concludes that he’ll simply have to write two endings and does – one very flat, quick and conventional and the other longer and much more plausible.

I love the characters in the world of this novel. Doctor Grogan, for instance, becomes a sort of mentor to Charles and shows us another, enlightened, Darwinist way of thinking. Charles’s servant Sam, modelled  – Fowles tells us –  on Sam Weller, is a rounded, quite complicated character too. Famous people of the period wander in and out too including Dante Gabriel Rossetti.

A couple of years after it was written a film was discussed. But this is no straightforward story. How on earth do you film such a complex, multilayered novel? In the end Harold Pinter came up with the idea of making it a narrative about making a film so that twentieth century actors could move in and out of their 19th century roles on set with relationships at both levels. It was an inspired, and I think, successful idea which, unusually, adds to what the book has already said rather than detracting from it which is what tends to happen when novels are dramatised. 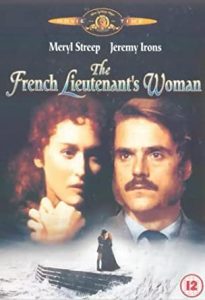 Next week on Susan’s Bookshelves: Because of You by Dawn French