Susan’s Bookshelves: A Horseman Riding By by RF Delderfield 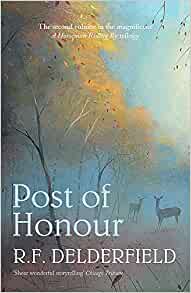 I’m a sucker for sagas. So, around 1970 – once I’d worked through everything saga-ish by Daphne du Maurier, read all the Forsytes and much more – I was delighted to stumble across RF Delderfield. His best ideas involve a young man returning from something (usually a war) looking for a purpose in life. The author then contrives an evolving community – suburban street, school, family business or whatever – in which to develop a huge network of characters across several generations, dominated by the aforesaid young man, in big fat trilogies the length of which makes a Victorian three decker seem like a novella.

A Horseman Riding By (1966) is arguably the best example of Delderfield’s prime genre, although, very prolific he also wrote other things including standalone novels, biographies and plays such as Worm’s Eye View. Its three component novels are: Long Summer’s Day, Post of Honour and The Green Gauntlet. All are still in print or you can download them.

Paul Craddock arrives back in London in 1902 having been injured in the Boer War. Although he’s not proud of it, he discovers from his late father’s partner that he has inherited a fortune made from scrap metal, an industry which usually benefits from war. He uses it to buy a Devon valley estate which includes six farms and gradually turns himself into a very wise, benevolent “Squire”. Cue for a wonderfully plausible, mostly likeable cast of characters including the valley families, his growing family of children and eventually grandchildren and great grandchildren.

All this is set accurately against the events of the day including the Suffragette movement (of which Paul’s first wife is a member), two world wars, the move away from farming towards tourism in the 1950s and lots more. The third novel ends soon after Churchill’s funeral in 1965.

One of the best things about A Horseman Riding By and its two sequels is Delderfield’s gift for realistic character development. No one stays the same any more than they do in real life. Circumstances change and so do people. Paul, a natural leader,  becomes a Liberal and, at one point, stands for parliament but I love the reactionary crustiness he acquires in old age. Smut Potter is the valley poacher and does a stretch in prison but later becomes a useful member of the community – among other things enlisting in 1914, meeting a French wife and starting a bakery back home in the local village. Paul’s twin sons seem very rackety and shallow until events change them both – in different ways.

It still reads very compellingly although it’s probably too long, at over 18,000  pages across the three novels. A modern editor would probably want to cut much of the philosophical reflections attributed to characters, especially Paul and would certainly condemn the weird whimsical passages in which a lone seagull drifts over the valley observing the activity below. There’s also a fair amount of repetition as Delderfield strives, usually, successfully to keep the reader on board when he’s harking back to something which happened hundreds of pages earlier. Don’t attempt to read this trilogy other than in the right order. These are minor points though, these three books have drawn me in in 2021 just as much as they did when I first read them 50 years ago.

Some of us remember a 1978  BBC TV adaptation of A Horseman Riding By starring the young Nigel Havers as Paul and the late Prunella Ransome as his wife, Claire. There were thirteen episodes back in the days when the BBC was willing/able to invest in big budget, ambitious projects. Perhaps Netflix could consider having a go at it now? I bet it would go down well in the US.

Meanwhile I shall continue to enjoy the books – there are three more Big Sagas on the Delderfield shelf. If, by the way, you want to know who Mr Delderfield was and what he did check out the New Dictionary of National Biograpahy ( online through your local library) Guess who wrote the Delderfield entry? 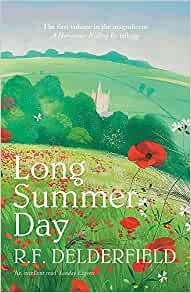 Next week on Susan’s Bookshelves: An Experiment in Love by Hilary Mantel