I first read The Machine Gunners soon after its publication and Carnegie Medal win in 1975. Within a year or two it was ubiquitous in secondary school English Department stock cupboards and widely taught as a class text – which is why it will be familiar to huge swathes of 30 and 40 somethings. It has also been televised and dramatised for the stage. The novel has now become a classic of young adult literature although I suspect it’s used less in schools these days because there is only one girl character, no ethnic diversity (apart from one Glaswegian!) and a certain amount of nationalism because we are, after all in 1941, although actually the book has a lot to say about the futility of war and the decency of people regardless of race. It certainly doesn’t glorify war.

The plot: a group of boys (later joined by their feisty friend, Audrey) find a machine gun in a shot down aircraft, set up a fortress with it and create their own unit to see off the enemy  all unbeknown to local, puzzled adults.  Then they find a German airman, starving and desperate, and take him prisoner. Rudi, eventually, gradually, becomes a friend which is where this story is deeply humane and warm.

The Machine Gunners is set in Garmouth, a thinly disguised Tynemouth, which is where Westall grew up. Tynemouth was quite heavily bombed and Westall bases the book’s background on his own memories. We start with Chas and his friends collecting war memorablia competitively and presumably that’s what the young Westall did.  He was (Westall died in 1993) the same age as his protagonist Chas McGill.  Written without thought of publication, the book was written in school exercise books to show his son Christopher what growing up during the war was like and Chas is based partly on Robert and partly on Christopher Westall. Other characters in the book came from real life too – the McGill parents and grandparents are portraits of Robert’s own family. All this is why the book felt, and feels so authentic.

Westall writes with colourful accuaracy and totally apt original imagery such as “ …burst the sandbags that protected the shelter door like paper bags” or “black with hate”. He also keeps it “clean” because he was writing in the mid-seventies and one was still required to be careful around young readers.  Boys like his characters would have sworn like – well, like the troopers they were pretending to be – but instead we get a lot of “faffing off” and any 2021 child will tell you what refined, protected Nicky would actually have said when he finally finds his courage in the book’s closing sentence.

I was quite moved by my re-reading of The Machine Gunners. The main characters are “just” children but what heartwarming courage, determination and resourcefulness. They prepare basic food on a paraffin heater in the fortress and there’s an unforgettable moment when they bring poor, frozen, terrified Rudi in and take his Luger from him and Audrey, ever practical, asks “Can I give him a cup of tea?”

The Machine Gunners was Westall’s first book and – for the next eighteen years there were to be many more mostly based around war and or the supernatural.  Scarecrows (1981) for example was seriously creepy and I loved Blitzcat (1989). Westall was a teacher and he’s good at school dynamics (such as bully in The Machine Gunners). He was also, latterly an antiques dealer which also features in some of his books. I think I’ll reread some of the rest of his oeuvre soon too.

Next week on Susan’s Bookshelves: Knowledge of Angels by Jill Paton Walsh 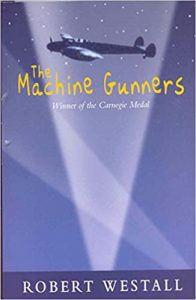