I remember exactly where I was when I completed my first reading of George Eliot’s magnum opus. I was in a caravan on a family holiday in South West France in 1966. It was one of half a dozen substantial novels which had to be read during the summer holiday for the Bishop Otter English course and that summer I was between my second and third years of teacher training there. With hindsight I think I may have been a more conscientious student than many others because I dutifully read each and every one – a series of discoveries for which I am very grateful. I still have my original copy of Middlemarch, well thumbed now because I’ve read it five or six times since. I chose the 1960s Penguin cover to illustrate this piece because, although there have been many chirpier ones since, this is the one I am very familiar with. It’s like an old friend and really does – literally – sit on my bookshelves.

Virginia Woolf famously remarked that Middlemarch is “one of the few English novels written for grown up people” and I think, at 20, I wasn’t quite grown up enough because I was daunted by the length and intensity and, I’m sure, missed many of the finer points. I was heartily relieved (and pleased with myself) when I finished it which is why that moment stands so clearly in my memory. It has, however, grown on me as I have grown up and I’ve found myself admiring it more each time I’ve reread it – most recently as a pandemic pastime.

The titular Middlemarch is a provincial town in the Midlands, loosely based on Coventry. The novel which has a huge cast of characters consists of a complex web of intersecting stories. George Eliot (pseudonym for Mary Anne Evans, pictured below, writing in an era when novels by men were more likely to be taken seriously) starts with the innocent, earnest, intelligent Dorothea Brooke and her misguided marriage to the much older, crusty cleric, Edward Casaubon. Using this as an entry point, she gives us nine chapters in which Dorothea feels like the novel’s main protagonist before branching out and gradually introducing the rest of the Middlemarchians with whom we are to spend the next 800 pages. They include Bulstrode, the puritanical banker with a murky past, Vincy the successful middle class tradesman and Lydgate the progressive doctor and newcomer to Middlemarch. Families are widely intermarried and undercurrents and back stories are everywhere.

The novel was published in eight volumes as a serial in 1871/2. I don’t want to belittle it by mentioning soap operas because it’s incomparably better than that but there are structural similarities as it darts between intersecting stories. It was, and is, a historical novel set in 1829/32 against the background of the Great Reform Act of 1832 so Eliot was looking back 50 years to a time which was in living memory for some: a bit like writing a novel today about events of 1970 when Richard Nixon sent troops into Cambodia and the Beatles broke up.

So which characters linger in the mind? I have a soft spot for poor Fred Vincy whose gambling habit very nearly does for him but who is saved, ultimately, by land agent Caleb Garth, one of the most likeable people in the novel. I’m also fond of plain speaking Mrs Garth, a teacher by profession who efficiently homeschools a large family of children. I identify with feisty Mrs Cadwallader too, who doesn’t believe in speaking only when she’s spoken to or taking second place to her rector husband.

Middlemarch bubbles with interesting contrasts and parallels: Worldly Rosamund Vincy (later Lydgate) highlights Dorothea’s religiosity by being so different. Casaubon’s will is, in its way, as spiteful and far reaching as Featherstone’s.  Celia Brooke’s single-minded maternal pride is comic but we can’t help soberly comparing her good fortune with Rosamund’s miscarriage.

Characters evolve, develop and change too as Lydgate recognises his mistakes and tries to rectify or live with them in disillusionment. The maturing of Fred Vincy is masterly and, of course, Dorothea’s trajectory is presented as beautifully as the Italian painting Eliot mentions in the novel’s opening paragraph. There are no stereotypes. Every character is rounded and recognisable 150 years later. The details might change. Human nature does not.

There was a pretty dire Middlemarch TV adaptation in 1994. It  meant, of course, that once Andrew Davies got his hands on it there was a great deal more dishy doctor (Douglas Hodge as Tertius Lydgate) and much less focus on ethereal Dorothea compared by Eliot in her prelude to St Theresa of Avila famed for religious ecstasy – not now very fashionable.  Juliet Aubrey does get a smidgin of Dorothea’s naïve otherworldliness but the emphasis is a long way from Eliot’s intentions. The late great Michael Hordern – one of his last appearances – is good as the curmudgeonly, dying Peter Featherstone, though.

But like all fine novels, Middlemarch is better read – in all its multifarious glory – than watched. And while lockdown looks likely to continue in some form for some time, I can think of few meatier novels to climb into than the work which Eliot subtitles “A study of provincial life.”

Next week on Susan’s Bookshelves: Blood and Sugar by Laura Shepherd-Robinson 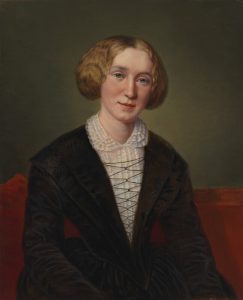