It was my A level geography teacher, Miss Diana Raine, who told me to read the novels of Neville Shute (1899-1960). We were studying Australia as our detailed regional study and Shute’s novels, she said, would give us the flavour of the climate and geography. Well, I’ve always been a sucker for fiction recommendations because they lead to exciting new experiences not to mention being the easiest way in the world of soaking up information effortlessly.  So I cheerfully embarked on A Town Like Alice (1950)  – one of my favourite books of all time – and then the rest of his oeuvre.

Of course they’re not all set in Australia  but that’s where he, an Englishman, settled after working on the development of secret weapons during Second World War. A chance remark from one of my string quartet friends recently reminded me  that I hadn’t reread any Shute for a while so I went back to his list where I alighted on Pied Piper (1942). I thought I had read all of Shute but this rang no bells  so I think I must, somehow have missed it all those years ago when I was going through my Shute-gobbling phase.

John Howard is retired widower who takes an unwise fishing tip to France in 1942 as he has done many times before. Invading forces begin to close in and the journey home looks increasingly difficult. Reluctantly he agrees to take with him two British children whose father works in Geneva because their parents are anxious about the immediate future. He sets off on a hazardous, obstacle-strewn trip through France, eventually in a German occupied area. It has all the traditional elements of a quest story.  On the way – each story and situation is different –  he somehow acquires four more children and the support of a young woman with whom he turns out to have more of a connection than he first realised.

It’s an affirmative, very readable, story of triumph against all odds. And of course – like Ian Seraillier’s The Silver Sword which I wrote about here recently – it’s more topical than ever. On the day that I’m drafting this the British Government is trying to find ways of admitting more Ukrainian refugees, all of them women and children. It’s also promising to support a hosting scheme so that British families can offer refuge to these people. Same old tragic issues. History goes on repeating itself.

Pied Piper also declares that – praise be – you can still achieve good things when you’re over 70. It’s an indication of how attitudes to ageing, and life expectancy, have changed since 1942 that Shute frequently refers to Howard as “The old man” and stresses his tiredness and fragility. I tried not to wince while reminding myself that that’s how it was 80 years ago. 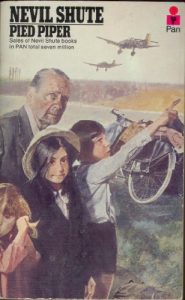 Next week on Susan’s Bookshelves: A Question of Upbringing by Anthony Powell