The Red Pony is one of John Steinbeck’s gut-wrenching novellas. I don’t know whether it’s still taught much in UK schools but we used to use it a lot as a key stage 3 class reader because it’s short, beautifully written (well it’s Steinbeck – enough said) and it’s about growing up and coming to terms with the imperfections of the adult world.

And it’s treat to go back to.

It was written, interestingly, as a serial for magazines – in the time honoured Dickensian manner except that this little novel (published 1937) is effectively short stories about Jody Tiflin rather than a series of cliff hangers.

Jody is ten at the beginning when his stern, taciturn farmer father brings home a red pony for his son on their tough, remote,  inland California farm. Billy Buck, the right hand man on the farm, lovingly teaches Jody what he needs to know but as Jody, soon learns, Billy – for all his experience and knowledge – is not infallible. It’s a powerful lesson as Jody creeps into adolescence.  Later incidents bring us the arrival of Gitano – born near the Tiflin ranch – but now homeless and old and a visit from Jody’s paternal grandfather. Then comes the promise of a new colt for Jody to rear which means getting the old mare, Nellie, in foal and then safely delivered – or not.  Much of this is really about the trust between adults and child as the latter learns that no adult can guarantee a perfect world and that some adults have a real struggle.

Part of Steinbeck’s genius is his ability to evoke nature and atmosphere: “He saw a hawk fkying so high that it caught the sun on its breast and shone like a spark.” “The ranch cats came down from the hill like blunt snakes.” “There was a rim of dawn on the mountain-tops”.  He also adept at the spareness of language usually associated with Hemingway so fussy subordinate clauses and compound and complex sentences are rare. Thus: “Billy droppped the knife.”  “At last she understood.” “Jody was tired.” Such incisiveness heightens the drama and adds to the poignancy.

I visited Salinas, where Steinbeck was born and where there’s a fine Steinbeck centre about his work, a few years ago while staying on the coast at Monterey. It was 35 degrees (Farenheit – this the USA)  hotter at Salinas on an August day than at Monterey and suddenly I was with Jody mopping the sweat.  I also watched vultures at work and vividly remembered The Red Pony although, of course, farming in California is much more industrialised now than it was in the 1930s.  So, apart from its being a  moving piece of literature it’s also worth reading The Red Pony (and Of Mice and Men,  East of Eden and the rest)  for the colourful evocation of how things were 90 years ago. 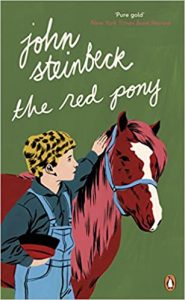 Next week on Susan’s Bookshelves: Wuthering Heights by Emily Bronte