Last summer I caught up with two former teaching colleagues over a congenial lunch when we were being encouraged to “Eat out to help out” (which seems a hazy memory now). Inevitably it wasn’t long before conversation turned to books as it always did over staff room coffee when we were all members of the same English department. “The Thornbirds is a marvellous book” declared D simply and without irony.

“The Thornbirds!” I spluttered in disbelief, shocked into rudeness. “But it was pulp tripe!” Intrigued by this conversation, later that day, I sat at my PC, discovered that Colleen McCullough’s 1977 novel is still in print and downloaded it very cheaply. Then I reread it. And since I started from a basis of expecting to think it was twaddle, I was pleasantly surprised by how good it is and shall apologise to D next time I see her.

Of course I read it – along with tens of millions of others worldwide – when it was first published and seem to remember quite enjoying it as a colourful example of romantic fiction. But then that was, I think, overlaid  in my memory by a TV adaptation starring Richard Chamberlain in 1983 which really was an utterly dire travesty. My kids dubbed it “The Yawn Birds” – with good reason. No doubt McCullough, who died in 2015, made a lot of money out of it but she can’t surely really have felt it served her novel truthfully?

Anyway, back to the real deal – the novel and how it reads nearly 40 years later. The large Catholic Cleary family are living in plausibly evoked poverty in rural New Zealand when a rich but manipulative aunt in Australia sends for them because she wants her brother to manage her estate, Drogheda, in a remote north western corner of New South Wales.  And that’s when Meggie, still a child, first meets Ralph de Bricassart, the local priest. He escorts them to Drogheda and becomes a close friend. As Meggie grows up, a complicated mutual attraction develops. To the 2021 reader the most worrying element is probably that Ralph could be said to be grooming her. Actually I think the author’s intention is more to explore the horrifying challenge of the celibacy required in the priesthood – either way there’s a lot of will-they-or-won’t-they tension in a novel which starts in 1915 and ends in 1969 and it’s not often predictable. In some ways it’s the old “forbidden love” story like Romeo and Juliet – one of the world’s seven great fictional options.

There are various things I like about The Thornbirds now. The characterisation is strong. Meggie comes from a whole family of brothers each of them with a distinct and convincing personality – especially poor, troubled Frank. Meggie’s mother Fee is a tight-lipped matriarch and I love the way McCullough presents the senior priests in Rome with whom Ralph eventually works. It’s full of rounded, interesting minor characters with stories of their own too – and all quite tightly plotted.

The estate – Drogheda – is effectively, another character which centres the novel and allows McCullough to paint a very graphic picture of outback New South Wales between the wars with its heat, horses, bush fires and all the rest of it – while the main house is incongruously, vulgarly European.

So set aside your snobby prejudices (if like me, you are silly enough to be harbouring any) and reread it. Or, if you’ve never read it, then trust me, you have a treat in store in The Thornbirds. 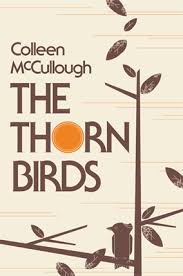 Next week on Susan’s Bookshelves: Eminent Victorians by Lytton Strachey