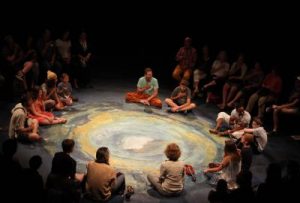 A group of 15 young people, mostly teenagers, sit on the floor with six actors. They form a circle around the island painted on the floor (designer: Anthony Lamble) in the studio space which is the Blue Room at the South Bank Centre. Adults – parents, carers, journalists and so on – sit in an outer circle on chairs. Some of these youngsters use little or no speech, are seriously disturbed by the unfamiliar and clearly need very skilled support. Director Kelly Hunter gently, smilingly coaxes them in, holding and stroking hands as needed, She is an enormously reassuring presence as, eventually she begins some simple drama games in which everyone in the room joins, having impressed me by effortlessly learning every child’s name. She must have a well-practised memory technique which doesn’t show at all.

Yes, this show loosely tells the story of The Tempest, mostly in Shakespeare’s words. It isn’t a so much a show, however, as collaborative guided play and it made me think quite hard about the linked dual meaning of the word “play” because Kelly Hunter’s The Tempest is a play in every sense of the word. Sifiso Mazibuku as a powerful Prospero stands from his position in the circle and tells the twitching, mercurial Andrew Trimmer as Ariel to “Take this shape”. Gradually the children are brought in in twos and threes to take a turn at acting out that moment in the play. And that sets the pattern – again and again actors play with a line, make its meaning utterly clear so that young participants skilfully guided by the actors can “do it on their feet” as the RSC Education’s Manifesto advocates. The lines hang together enough to provide a narrative of sorts from Prospero’s first commanding Ariel to start a storm though to his setting him free.

All six professionals are fine, adaptable, sensitive actors totally attuned to the delicate needs, reluctances and enthusiasms of the young people they’re working with. And they make it look such infectious fun (especially Eva Lily Tausig and Chris Macdonald as Miranda and Ferdinand falling in love at first sight) that eventually even the most anxious audience members are actively wanting to be included. One boy in particular – probably with profound and multiple learning difficulties – whose parents had to take him out for a break eventually came into the ring and took part three times. Tas Embiata as Caliban danced with him very gently as the whole room chanted “Ban, ban c-Caliban”. Embiata unobtrusively adjusted his footwork and rhythm for each participant as he or she came forward to join in. For me it was the most moving aspect of the whole performance.
There’s a lot of humour in this show. Investigating “the monster of the isle” which ended up with six head, gave us Tricia Gannon, an engaging Trinculo lying down beside Caliban to hide as more and more participants joined in.

One boy, highly articulate, evidently an experienced actor and without language difficulties said joyfully at the end “The was the best two hours of my life!” Cast and creatives couldn’t ask for a better reaction.