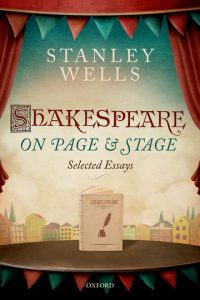 Stanley Wells is the UK’s foremost Shakespeare scholar. He is also one of our most accessible writers and anything he produces is reliably readable as well as informative and penetrating. This new volume is a selection of essays (introduced and edited by Paul Edmondson, Head of Research and Knowledge at Shakespeare Birthplace Trust) whose original publication dates range from 1963 to 2015. Thus you can share Wells’s journey of thought development over more than 50 years. I especially enjoyed and learned from the very detailed Staging Shakespeare’s Ghosts (1991) which examines how Banquo, Caesar, Hamlet’s father and so on might have been staged and perceived in Shakespeare’s day. The text is revealing. So is Wells’s immense knowledge of contemporary practice. Other highlights include an enlightening essay about Juliet’s nurse, an examination of critical response by, for example Hazlitt and Beerbohm along with Wells own thoughts about being a general editor – for both Penguin Books and OUP. 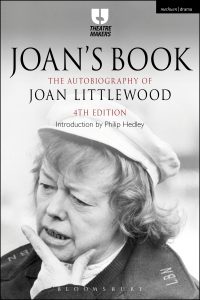 To read this book is to plunge – literary total immersion – into the graphic world of Joan Littlewood from the very first page when she describes her unwanted, illegitimate birth in 1914 to a desperate, poor young SE London mother through to becoming a one-off theatre revolutionary who changed the way theatre works for ever and who upset as many people as she delighted. Her company, Theatre Workshop, developed and premiered shows such as Oh What a Lovely War!, Taste of Honey and The Quare Fellow. Her 500 page book which is as gritty and tradition-rejecting as her shows, and about as far as you could get from maudlin memoir, was first published in 1994, eight years before her death. This new edition aims to introduce her works, ideas, views, personality and background to a new generation of readers with introduction by Philip Headley who was assistant director to Littlewood at Stratford East.

This useful book is likely to help anyone who wants to stage young audience work. Two people who really know (Ireland is a former director of Polka Theatre and Harrison of Cleveland Theatre Company) provide the practical lowdown on plays ranging from David Wood’s The Gingerbread Man to Nick Wood’s Warrior Square and Peter Rumney’s Cosmos. What is the play about? How many actors does it need? Who premiered it? What do they say about it? Where can you get the script from? It’s all here along with advice about festivals, resources, sources of advice and a list of companies specialising in plays for young audiences.