Oxford School of Drama (featured image), one of the seven  which are no longer part of Drama UK 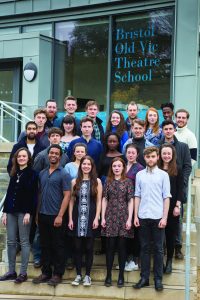 2016 graduates, Bristol Old Vic Theatre School, another of the seven which are no longer part of Drama UK

It claims to “provide a unique link between the theatre, media and broadcast industries and drama training providers in the UK.”  That’s Drama UK, the organisation founded in 2012 from a merger of the old Conference of Drama Schools and National Council of Drama Training.

Well if Drama UK doesn’t blow its own trumpet then I doubt that anyone else will. It goes on to assert that it gives “a united, public voice to this sector.” It offers “help and advice to drama students of all ages” and awards “a quality kite mark to the very best drama training available”.

Really? The “very best drama training available”? And yet that doesn’t include the three Conservatoires for Dance and Drama schools – RADA, LAMDA and Bristol Old Vic – who pulled out en masse last year. The Guildhall and Oxford School of Drama also withdrew in 2015 and Royal Conservatoire of Scotland and Royal Welsh College of Dance and Drama have long since decided to do their own thing. “United” isn’t, therefore, the adjective I’d have chosen for Drama UK’s voice.

Anyone who knows the first thing about drama training is aware that the seven schools who have quit really are offering world class training and it is nonsense for Drama UK to pretend they work with the “very best” without these jewels in the crown. That is not to say – of course – that the 13 schools which have, so far, chosen to remain in Drama UK (I’m puzzled about why) are not doing good work. It’s simply that, as things are, they can’t truthfully be described as the totality of the best.

And it’s a small point but Drama UK really shouldn’t use the expression “Kitemark” which is copyright to the British Standards Institution (BSI Group) and may not legally be used by anyone else. You have to say “badge of approval” or think of some snappy new term of your own. Ask a journalist. Most of us have made this mistake at some point in the past and been pulled up for it.

But back to the woes of the arguably pointless Drama UK. It currently accredits its core13 schools and “recognises” seven university departments. The accredited 13 each pay £6.000 per year membership and an additional accreditation fee.  Accreditation requires a great deal of paper work which small schools cannot afford the resources to do so it’s hardly an inclusive organisation. Moreover the accreditation visits, I was recently reminded by a principal who asked not to be named, are conducted by three fellow principals. Yes – that’s right. How can that possibly be truly dispassionate when all these schools are, at the end of the audition process, competing for the best students – in effect, their credibility and livelihood?

Given the numbers, Drama UK’s income is now very low. But never mind. They’re making a good fist of establishing “the brand” in China which means plenty of jetting to and fro.  Don’t ask me to work out how that is supposed to benefit the dwindling group of paying members  and their students back here in the UK.

Last December, Ian Kellgren and Jude Tisdall who run Drama UK asked me out to lunch to discuss all this, largely I think because they’re irritated by reading articles like this one. They seemed in pretty low spirits although the lunch was tasty) and asked me what I would do in their position. I told then I’d go right back to the beginning, unwind and ask schools exactly what they want from an “umbrella” or linking organisation. They said they’d already done that but nonetheless joked that I had “earned my lunch”.

Well from the outside I’ve seen no change of any sort in the last eight months. And if they asked me that question today I think I’d tell them to disband it and go back to their day jobs. The training industry – or much of it – seems to be able to function perfectly well  without a “united public voice” and I think the remaining schools could (should) save their students’ money by quitting.

Meanwhile, at the beginning of another academic year, I’m having private bets with myself – and anyone else who’s interested – about which of those 13 will be the next to leave.